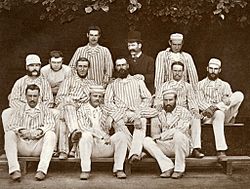 The Australian team that toured England in 1878

The Australian team has played 744 Test matches, winning 350, losing 194, drawing 198 and tying two. Australia is ranked the number-one team overall in Test cricket in terms of overall wins, win-loss ratio and wins percentage. Australia is ranked fourth in the ICC Test Championship behind England, South Africa and India. They led the Test rankings for a record time of 74 months from 2003 to 2009.

The team was undefeated in 34 consecutive World Cup matches until 19 March at the 2011 Cricket World Cup. There Pakistan beat them by 4 wickets. Australia won the ICC Champions Trophy twice – in 2006 and in 2009 – making them the first and the only team to become back to back winners in the Champions Trophy tournaments. The team has also played 39 Twenty20 Internationals.

All content from Kiddle encyclopedia articles (including the article images and facts) can be freely used under Attribution-ShareAlike license, unless stated otherwise. Cite this article:
Australia national cricket team Facts for Kids. Kiddle Encyclopedia.