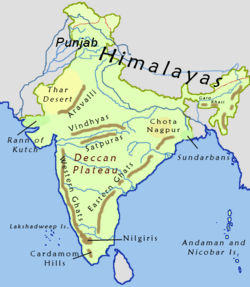 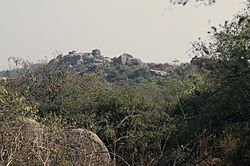 Hills of granite boulders are a common feature of the landscape on Deccan Plateau. This is near Hyderabad in Telangana State

The Deccan Plateau is a large plateau in India which covers most of the southern part of the country. It is between three mountain ranges and extends over eight Indian states; in particular the states of Telangana, Andhra Pradesh, Karnataka, Kerala and Tamil Nadu are on this plateau.

The uplands, areas of higher land, make up a triangle nested in the familiar downward-pointing triangle of the Indian sub-continent's coastline. In the south of India the plateau is mostly over 1,000 metres (3,300 ft) above sea level. In the north it is mostly about 500 metres (1,600 ft) above sea level. The plateau is extremely large and there are many habitats: different ecosystems with different sorts of vegetation, climate, geology and animals. The forests on the plateau are older than the Himalayan mountains.

On the west of the plateau are the Western Ghats and in the east are the Eastern Ghats. These mountain ranges rise from their nearby coastal plains and nearly meet at the southern tip of India. The mountains make the southward-pointing vertex of a triangle. The northern boundary of the triangle is made up by the Satpura Range and Vindhya Range. These northern ranges separate the plateau from the heavily populated riverine plains of northern India.

The name is an anglicised from the Prakrit word dakkhin. That word comes from the Sanskrit word dakṣiṇa- (Sanskrit: दक्षिण), meaning 'South' or 'The South'. 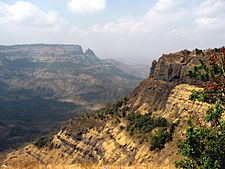 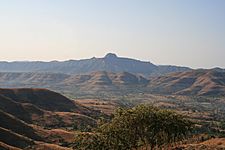 The Deccan Traps near Pune

The Deccan Traps are a main cause of the special geography and geology of South India. They are a large igneous province on the Deccan Plateau of west-central India (between 17–24N, 73–74E) and one of the largest volcanic features on Earth. They consist of multiple layers of solidified flood basalt that are more than 2,000 m (6,562 ft) thick and cover an area of 500,000 square kilometres (190,000 sq mi). The term 'trap', used in geology for such rock formations, is derived from the Dutch word for stairs, referring to the step-like hills forming the landscape of the region.

The Deccan Traps formed between 60 and 68 million years ago, at the end of the Cretaceous period. The bulk of the volcanic eruption occurred at the Western Ghats (near Mumbai) some 66 million years ago. This series of eruptions may have lasted fewer than 30,000 years in total. The gases released in the process may have played a role in the Cretaceous–Tertiary extinction event, which included the extinction of the non-avian dinosaurs. The consensus among the scientific community is that the extinction was triggered by the Chicxulub impact event in Central America, but that the Deccan eruptions also damaged the world's environment.

Before the Deccan Traps region was reduced to its current size by erosion and plate tectonics, it is estimated that the original area covered by the lava flows was as large as 1.5 million km², about half the size of modern India. The present area of directly observable lava flows is estimated to be around 512,000 square kilometres (198,000 sq mi).

The release of volcanic gases, particularly sulfur dioxide, during the formation of the traps contributed to contemporary climate change. Data point to an average fall in temperature of 2 °C (36 °F) in this period.

All content from Kiddle encyclopedia articles (including the article images and facts) can be freely used under Attribution-ShareAlike license, unless stated otherwise. Cite this article:
Deccan Plateau Facts for Kids. Kiddle Encyclopedia.