List of dams in the Colorado River system facts for kids 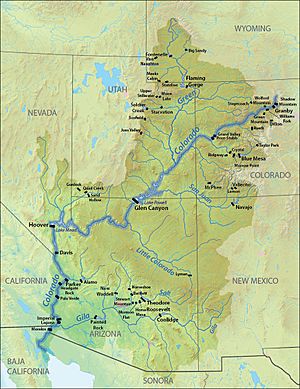 This is a list of dams on the Colorado River system of the southwestern United States and northwestern Mexico. The Colorado runs 1,450 mi (2,330 km) from the Rocky Mountains to the Gulf of California, draining parts of seven U.S. states and two Mexican states. The river system is one of the most heavily developed in the world, with fifteen dams on the main stem of the Colorado and hundreds more on tributaries. Collectively, dams in the Colorado River basin can hold four to five times the river's annual flow, generating hydroelectricity and supplying irrigation and municipal water for over 35 million people.

Dams on tributaries are listed if they are taller than 250 ft (76 m), store more than 50,000 acre⋅ft (62,000 dam3), or are otherwise historically notable. Tributary dams are organized into two lists; those in the Upper Basin, defined as the half of the Colorado River basin above Lee's Ferry, Arizona, and the Lower Basin. The Upper Basin include such tributary systems as the Green, Gunnison and San Juan. Tributaries in the Lower Basin include the Little Colorado, Virgin and Gila. A key tributary of the San Juan River, the Animas River, was severely affected by the EPA's accidental August 2015 Gold King Mine waste water spill.

All content from Kiddle encyclopedia articles (including the article images and facts) can be freely used under Attribution-ShareAlike license, unless stated otherwise. Cite this article:
List of dams in the Colorado River system Facts for Kids. Kiddle Encyclopedia.