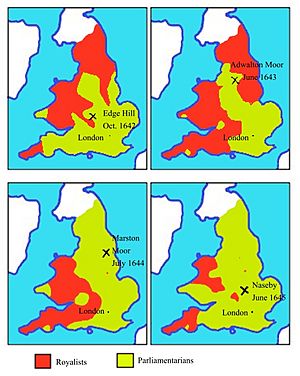 Maps of territory held by Royalists (red) and Parliamentarians (green) during the English Civil War (1642–1645).

English Civil War happened in the middle 17th century. The term covers a period between 1642 and 1651 in England, Scotland and Ireland. Some people consider all this fighting to be one big war, while others think it should be seen as several different wars that were linked. Some of these wars and conflicts have been given their own names, such as:

A civil war is a war where the sides involved in the fighting are from the same country. In the period of the English Civil War, the King ruled England and Scotland, but the fighting that took place in each of these countries broke out at different times and for several different reasons. The Protestant Reformation had encouraged new ideas and struggles.

The reasons for the fighting were mostly to do with power, money and religion:

After a few years of quarrelling, the members of Parliament raised an army to fight against the King. The King moved out of London and took the royal court to Oxford, where he had more loyal followers than in London. The first war was fought between King Charles's army and the army of Parliament. King Charles's army soldiers were called "Cavaliers", and the army of Parliament's soldiers were called "Roundheads". Parliament won the first war, and King Charles was put in prison, but he escaped and a second war broke out. Parliament won the second war also, and they put King Charles on trial because they did not want any more fighting. He was found guilty of treason and was executed in 1649. This did not stop the fighting, however.

During the war, Parliament found a new leader, a man called Oliver Cromwell, who was very good at leading an army and also had ideas about how to rule the country. Not everyone liked him, but he was the strongest leader and in time he became the ruler of the whole country. Cromwell took the title of "Lord Protector" rather than King, because he did not think the country needed another king. His government was called "the Protectorate". In the meantime, King Charles I's eldest son, the Prince of Wales, had left Britain and set up his own royal court in Holland, calling himself King Charles II of England. He came back to fight another battle against the army of Parliament. His father, King Charles I, had been born in Scotland, and Scots who were loyal to the royal family were among his most important supporters. The Third Civil War (1649 - 1651) was fought between supporters of King Charles II and supporters of the Rump Parliament. The Civil War ended when Parliament won the Battle of Worcester on 3 September 1651. Charles II had to disguise himself in order to escape.

Oliver Cromwell ruled the country until he died in 1658. Cromwell's son, Richard, took over as Lord Protector. However, he was not as tough as his Father. The People begged King Charles's son to come back. Charles II came back from Holland and became King of Britain again, with the support of the people.

All content from Kiddle encyclopedia articles (including the article images and facts) can be freely used under Attribution-ShareAlike license, unless stated otherwise. Cite this article:
English Civil War Facts for Kids. Kiddle Encyclopedia.