Shire of Maroochy facts for kids

The Shire of Maroochy was a local government area about 100 kilometres (62 mi) north of Brisbane in the Sunshine Coast region of South East Queensland, Australia. The shire covered an area of 1,162.7 square kilometres (448.9 sq mi), and existed as a local government entity from 1890 until 2008, when it amalgamated with its neighbours to the north and south to form the Sunshine Coast Region. 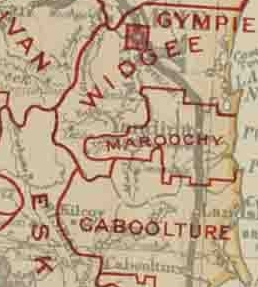 In 1842, Andrew Petrie explored the coast north of Brisbane and discovered the Mary River with a small party including two Aboriginal men from the Brisbane River region who spoke the Yuggera language. Their name for the local black swan was "Muru-kutchi" or "red-bill". Petrie hence named the area Maroochy.

The area was originally incorporated as part of the Caboolture Divisional Board on 11 November 1879 under the Divisional Boards Act 1879. On 5 July 1890, Maroochy split away and was proclaimed as a Maroochy Division in its own right, with an area of 1,265 square kilometres (488 sq mi) and headquarters at Nambour. It did not initially contain Buderim or Kenilworth. The first elections were held on 13 September for three councillors, each of whom represented one subdivision. By 1895, council chambers had been erected firstly on Blackall Terrace and then at Station Square adjacent to the Nambour railway station, where they were to continue meeting until 1978.

With the passage of the Local Authorities Act 1902, Maroochy became a shire council on 31 March 1903. The first land sale in Maroochydore in 1908 allowed 8.1 square kilometres (2,002 acres) along the coast to be opened up, allowing for the development of the towns of Alexandra Headland and Mooloolaba. The council commenced supplying electricity in 1927, and a hospital was opened in 1930. With the start of major development in South East Queensland in the late 1950s, Maroochy Airport (now Sunshine Coast Airport, the major regional facility) was opened in 1961. The Shire grew rapidly from this point onwards.

Fires were a persistent problem in the hinterland region, and on Anzac Day in 1948, a fire significantly damaged the Shire Chambers. In 1978, the Shire moved its offices to a new location in Bury Street, Nambour, with the old facility in Civic Square remaining as a civic hall. On 15 August 1986 a fire damaged this beyond repair—it was bulldozed three years later to make way for the new Centenary Square development.

On 15 March 2008, under the Local Government (Reform Implementation) Act 2007 passed by the Parliament of Queensland on 10 August 2007, the Shire of Maroochy merged with the Shire of Noosa and the City of Caloundra to form the Sunshine Coast Region.

The Shire was subdivided into 12 numbered divisions, each of which returned one councillor, and an elected mayor.

The Shire of Maroochy included the following settlements:

All content from Kiddle encyclopedia articles (including the article images and facts) can be freely used under Attribution-ShareAlike license, unless stated otherwise. Cite this article:
Shire of Maroochy Facts for Kids. Kiddle Encyclopedia.