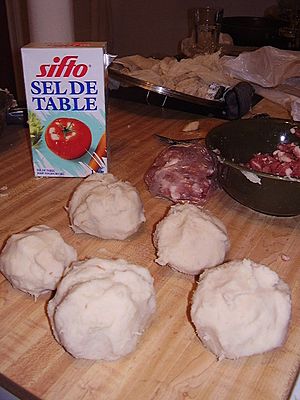 Acadian cuisine (French: Cuisine acadienne) is the traditional dishes of the Acadian people. It is primarily seen in the present-day cultural region of Acadia. Acadian cuisine has been influenced by many things throughout its history, namely the Deportation of the Acadians, proximity to the ocean, the Canadian winter, soil fertility, the Cuisine of Quebec, Native Americans, American cuisine and English cuisine. The cuisine of immigrants and trade with specific regions of the world have also played small roles.

Acadian cuisine is not very well known in Canada or internationally. It has much in common with Québécois cuisine because of shared history and heritage as well as geographical proximity. The two often feature the same dishes, but the cuisine of Acadia puts more emphasis on seafood. Acadian cuisine has notably served as the base for Cajun cuisine because the Cajun are descendants of Acadians who were deported to Louisiana. Its also believed that Acadians are responsible for normalizing potato consumption in France—a vegetable the French once considered poisonous.

French colonists who settled Acadia in the 17th century adapted their 16th-century French cuisine to incorporate the crops, seafood and animals that flourished in the region. Their descendants became the Acadian people and their ingenuity created Acadian cuisine.

After the English conquered Acadia during the 18th century, they decided to deport the Acadians and take their settlements, which were often build on the most fertile earth in the colony. Most Acadians did not manage to escape the deportation. But, of those who did, most fled to the east and north of New Brunswick. As such, Acadian cuisine in the 18th century was refocused around what could be grown and used in the less fertile lands of the East Coast of New Brunswick and the Upper St. John River Valley.

The most commonly used meat is pork, followed by chicken and beef. As with the rest of North America, turkey is commonly consumed during the Holidays. Game like deer, hares, ruffed grouse and moose is consumed regularly in some regions. Game will replace livestock meat if present and can be given as a gift. In some regions, for example Caraquet and the Îles-de-la-Madeleine, more unusual game is or was caught like seal, bear and seagull.

The vegetables of Acadian cuisine are the potato, onion, carrot, turnip, legume, beet, squash and corn. These vegetables were popular because they were easily preserved for the winter in root cellars and jars.

Some ingredients like rice, molasses, dried raisins and brown sugar make a frequent appearance in Acadian recipes because of historical commerce between Acadia and regions like the Antilles and Brazil. 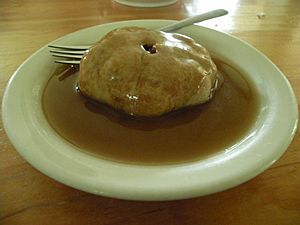 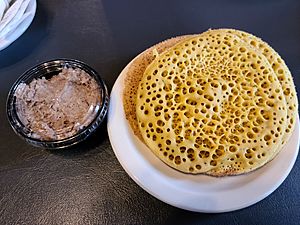 Ployes are extremely popular in the Madawaska region. 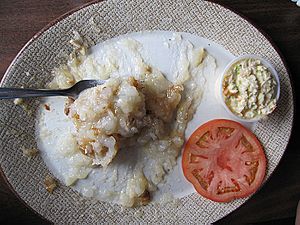 Rappie pie or râpure is a dish whose name comes from patates râpées, meaning "grated potatoes".

Some examples of traditional Acadian dishes are:

All content from Kiddle encyclopedia articles (including the article images and facts) can be freely used under Attribution-ShareAlike license, unless stated otherwise. Cite this article:
Acadian cuisine Facts for Kids. Kiddle Encyclopedia.