Founding Fathers of the United States facts for kids 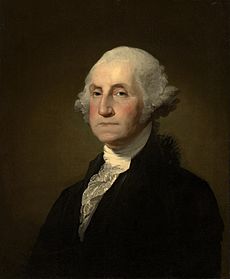 George Washington served as President of the 1787 Constitutional Convention.

The Founding Fathers refers to certain men who lived during the American Revolutionary War era. These men signed the Declaration of Independence, helped write the Constitution of the United States, or helped win the American Revolutionary War. Many of these men were members of the Continental Congress at some point. The term was first applied to these people in 1916.

There were many people who were Founding Fathers. Some scholars like to limit them to a small number, such as seven: George Washington, John Adams, Thomas Jefferson, Benjamin Franklin, Alexander Hamilton, John Jay, and James Madison. 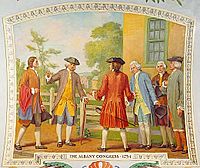 The First Continental Congress met briefly in Philadelphia, Pennsylvania in 1774 and consisted of fifty-six delegates from twelve of the Thirteen Colonies that would become the United States of America. The delegates, who included George Washington, soon to command the army, Patrick Henry, and John Adams, were elected by their respective colonial assemblies. Other notable delegates included Samuel Adams from Massachusetts, John Dickinson from Pennsylvania and New York's John Jay. This congress in addition to formulating appeals to the British crown, established the Continental Association to administer boycott actions against Britain. When the Second Continental Congress came together on May 10, 1775, it was, in effect, a reconvening of the First Congress. Many of the same 56 delegates who attended the first meeting participated in the second. Notable new arrivals included Benjamin Franklin and Robert Morris of Pennsylvania, John Hancock of Massachusetts, and John Witherspoon of New Jersey. Hancock was elected Congress President two weeks into the session when Peyton Randolph was summoned back to Virginia to preside over the House of Burgesses. Thomas Jefferson replaced Randolph in the Virginia congressional delegation. The second Congress adopted the Declaration of Independence. Witherspoon was the only active clergyman to sign the Declaration. He also signed the Articles of Confederation and attended the New Jersey (1787) convention that ratified the Federal Constitution.

The newly founded country of the United States had to create a new government to replace the British Parliament. The Americans adopted the Articles of Confederation, a declaration that established a national government which was made up of a one-house legislature. Its ratification by all thirteen colonies gave the second Congress a new name: the Congress of the Confederation, which met from 1781 to 1789. Later, the Constitutional Convention took place during the summer of 1787, in Philadelphia. Although the Convention was called to revise the Articles of Confederation, the intention from the outset of many–chief among them James Madison and Alexander Hamilton–was to create a new frame of government rather than to fix the existing one. The delegates elected George Washington to preside over the Convention. The result of the Convention was the United States Constitution.

Collective biography of the Framers of the Constitution 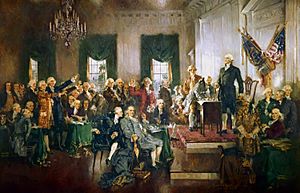 Scene at the Signing of the Constitution of the United States, by Howard Chandler Christy

In the winter and spring of 1786–1787, twelve of the thirteen states chose a total of 74 delegates to attend what is now known as the Federal Convention in Philadelphia. Nineteen delegates chose not to accept election or attend the debates; for example, Patrick Henry of Virginia thought that state politics were far more interesting and important than national politics, though during the ratification controversy of 1787–1788 he claimed, "I smelled a rat." Rhode Island did not send delegates because of its politicians' suspicions of the Convention delegates' motivations. As a sanctuary for Baptists, Rhode Island's absence at the Convention in part explains the absence of Baptist affiliation among those who did attend. Of the 55 who did attend at some point, no more than 38 delegates showed up at one time.

These delegates represented a cross-section of 18th-century American leadership. Almost all of them were well-educated men of means who were leaders in their communities. Many were also prominent in national affairs. Virtually every one had taken part in the American Revolution; at least 29 had served in the Continental Army, most of them in positions of command. Several of the latter were instrumental in establishing the Society of the Cincinnati in 1783. Scholars have examined the collective biography of them as well as the signers of the Declaration and the Constitution.

The Framers of the Constitution had extensive political experience. By 1787, four-fifths (41 individuals), were or had been members of the Continental Congress. Nearly all of the 55 delegates had experience in colonial and state government, and the majority had held county and local offices.

The 1787 delegates practiced a wide range of high and middle-status occupations, and many pursued more than one career simultaneously. They did not differ dramatically from the Loyalists, except they were generally younger and less senior in their professions.

A few of the 1787 delegates were wealthy, but many of the country's top wealth-holders were Loyalists who went to Britain. Most of the others had financial resources that ranged from good to excellent, but there are other founders who were less than wealthy. On the whole they were less wealthy than the Loyalists.

Brown (1976) and Harris (1969) provide detailed demographic information on each man.

The Founding Fathers had strong educational backgrounds at the colonial colleges or abroad. Some, like Franklin and Washington, were largely self-taught or learned through apprenticeship. Others had obtained instruction from private tutors or at academies. About half of the men had attended or graduated from college. Some men held medical degrees or advanced training in theology. Most of the education was in the colonies, but several were lawyers who had been trained at the Inns of Court in London.

All content from Kiddle encyclopedia articles (including the article images and facts) can be freely used under Attribution-ShareAlike license, unless stated otherwise. Cite this article:
Founding Fathers of the United States Facts for Kids. Kiddle Encyclopedia.