The History of North America deals with an area where humans came to live relatively recently, compared to Africa, Europe, and Asia.

Scientists have different theories as to the origins of the early human population of the continent. The indigenous peoples of North America themselves have many creation stories, that tell that native Americans have been present on the land since its creation.

Before contact with Europeans the natives of North America were divided into many different communities, from small bands of a few families to large empires. They lived in several culture areas, which roughly correspond to geographic and biological zones of North America and give a good indication of the main occupation of the people who lived there (e.g. the Bison hunters of the Great Plains, or the farmers of Mesoamerica). Native groups can also be classified by their language family. It is important to note that peoples with similar languages did not always share the same material culture, nor were they always allies.

Scientists believe that the Inuit people of the high Arctic came to North America much later than other native groups, as evidenced by the disappearance of Dorset culture artifacts from the archaeological record, and their replacement by the Thule people.

During the thousands of years of native inhabitation on the continent, cultures changed and shifted. Archaeologists often name different cultural groups they discover after the site where they are first found. One of the oldest cultures yet found is the Clovis culture of modern New Mexico. A more recent example is the group of related cultures called the Mound builders (e.g. the Fort Walton Culture), found in the Mississippi river valley. They flourished from 3000 BC to the 1500s AD. 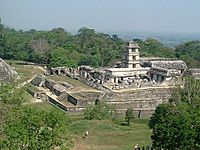 The ruins of Palenque.

The more southern cultural groups of North America were responsible for the domestication of many common crops now used around the world, such as tomatoes and squash. Perhaps most importantly they domesticated one of the world's major staples, maize (corn).

As a result of the development of agriculture in the south, important cultural development was possible there. For example, the Maya civilization developed a writing system, built huge pyramids, had a complex calendar, and developed the concept of zero 500 years before anyone in the Old World. The Mayan culture was still present when the Spanish arrived in Central America, but political dominance in the area had shifted to the Aztec Empire farther north.

Upon the arrival of the Europeans in the "New World", native peoples found their culture changed drastically. As such, their affiliation with political and cultural groups changed as well, several linguistic groups went extinct, and others changed quite quickly. The name and cultures that Europeans recorded for the natives were not necessarily the same as the ones they had used a few generations before, or the ones in use today.

There was limited contact between North American peoples and the outside world before 1492. Several theoretical contacts have been proposed, but the earliest physical evidence comes to us from the Norse or Vikings. Norse captain Leif Erikson is believed to have reached the Island of Newfoundland circa 1000 AD. They named their new discovery Vinland. The only Norse site yet discovered in North America is at L'Anse aux Meadows, Newfoundland and Labrador. The Norse colonies were later abandoned.

The Viking voyages did not become common knowledge in the Old World, and Europeans remained ignorant of the existence of the Americas, until 1492. As part of a general age of discovery Italian sailor Christopher Columbus proposed a voyage west from Europe to find a shorter route to Asia. He eventually received the backing of Isabella I and Ferdinand II, Queen and King of newly united Spain. In 1492 Columbus reached land in the Bahamas.

Almost 500 years after the Norse, John Cabot explored the east coast of what would become Canada in 1497. Giovanni da Verrazzano explored the East Coast of America from Florida to presumably Newfoundland in 1524. Jacques Cartier made a series of voyages on behalf of the French crown in 1534 and penetrated the St. Lawrence River.

Initially, European activity consisted mostly of trade and exploration. Eventually Europeans began to establish settlements. The three principal colonial powers were Spain, England, and France, although eventually even small powers like the Netherlands and Sweden received minor holdings on the continent.

Settlement by the Spanish started the European colonization of the Americas, involving genocide of the native Indians. They gained control of most of the largest islands in the Caribbean and conquered the Aztecs, gaining control of present-day Mexico and Central America. This was the beginning of the Spanish Empire in the New World. The first successful Spanish settlement in continental North America was Veracruz in 1519, followed by many other settlements in colonial New Spain and Spanish Florida.

The first successful English settlements were at Jamestown (1607) (along with its satellite, Bermuda in 1609) and Plymouth (1620), in what are today Virginia and Massachusetts respectively. The first French settlements were Port Royal (1604) and Quebec City (1608) in what is now Nova Scotia and Quebec. The Fur Trade soon became the primary business on the continent and as a result transformed the Native Americans lifestyle.

Farther to the south, plantation slavery became the main industry of the West Indies, and this gave rise to the beginning of the Atlantic slave trade.

By 1663 the French crown had taken over control of New France from the fur-trading companies, and the English charter colonies gave way to more metropolitan control. This ushered in a new era of more formalized colonialism in North America.

Rivalry between the European powers created a series of wars on the North American landmass that would have great impact on the development of the colonies. Territory often changed hands multiple times. Peace was not achieved until French forces in North America were vanquished at the Battle of the Plains of Abraham at Quebec City, and France ceded most of her claims outside of the Caribbean.

Viceroyalty of New Spain was the name of the viceroy-ruled territories of the Spanish Empire in Asia, North America and its peripheries from 1535 to 1821.

The coming of the American Revolution had a great impact across the continent. Most importantly it directly led to the creation of the United States of America. However, the associated American Revolutionary War was an important war that touched all corners of the region. The flight of the United Empire Loyalists led to the creation of English Canada as a separate community. Meanwhile, Spain's hold on Mexico was weakening. Independence was declared in 1810 by Miguel Hidalgo, starting the Mexican War of Independence. In 1813, José María Morelos and the Congress of Anáhuac signed the Solemn Act of the Declaration of Independence of Northern America, the first legal document where the separation of the New Spain with respect to Spain is proclaimed. Spain finally recognized Mexico's independence in 1821.

From the time of independence of the United States, that country expanded rapidly to the west, acquiring the massive Louisiana territory in 1803. An attempt at northern expansion was blocked by Britain during the War of 1812. At the same time, British settlement in Canada increased. US expansion was complicated by the division between "free" and "slave" states, which led to the Missouri Compromise 1820. Likewise, Canada faced a division between French and English communities that led to the outbreak of civil strife in 1837. Mexico faced constant political tensions between liberals and conservatives, as well as the rebellion of the English-speaking region of Tejas, which declared itself the Republic of Texas 1836. In 1845 Texas joined the United States, which would later lead to the Mexican–American War. As a result of conflict with Mexico, the United States made further territorial gains in California and the Southwest.

In Mexico, the entire era was dominated by the dictatorship of Porfirio Díaz.

As part of the British Empire, Canada immediately was at war in 1914. Canadian troops bore the brunt of several major battles during the early stages of the war including the use of poison gas attacks at Ypres. Newfoundland troops suffered a devastating loss on July 1, 1916, the First day on the Somme. Losses became grave, and the government eventually brought in conscription, despite the fact this was against the wishes of the majority of French Canadians. In the ensuing Conscription Crisis of 1917, riots broke out on the streets of Montreal.

The United States stayed apart from the conflict until 1917, joining the Entente powers. The United States was then able to play a crucial role at the Paris Peace Conference of 1919 that shaped interwar Europe.

Mexico was not part of the war as the country was embroiled in the Mexican Revolution at the time.

From 1936 to 1949, this was a popular uprising against the anti-Catholic Mexican government of the time, set off specifically by the anti-clerical provisions of the Mexican Constitution of 1917.

Once again Canada found itself at war before its neighbours, however even Canadian contributions were slight before the Japanese attack on Pearl Harbor.

The entry of the United States into the war helped to tip the balance in favour of the allies.

Two Mexican tankers, transporting oil to the United States, were attacked and sunk by the Germans in the Gulf of Mexico waters, in 1942. The incident happened in spite of Mexico's neutrality at that time. This led Mexico to declare war to the Axis nations and entered the conflict.

The devastation of Europe in the war led North American countries to more important roles in world affairs. The United States especially emerged as a "superpower".

The early Cold War era saw the United States as the most powerful nation in a Western coalition of which Mexico and Canada were also a part. At home, the United States witnessed convulsive change especially in the area of race relations. In Canada this was mirrored by the Quiet Revolution and the emergence of Quebec nationalism.

Mexico experienced an era of huge economic growth after World War II, a heavy industrialization process and a growth of its middle class, a period known in Mexican history as the "El Milagro Mexicano" (Mexican miracle).

The Caribbean saw the beginnings of decolonization, while on the largest island the Cuban Revolution introduced Cold War rivalries into Latin America.

All content from Kiddle encyclopedia articles (including the article images and facts) can be freely used under Attribution-ShareAlike license, unless stated otherwise. Cite this article:
History of North America Facts for Kids. Kiddle Encyclopedia.