This is a list of Royal Military College of Canada memorials and traditions. 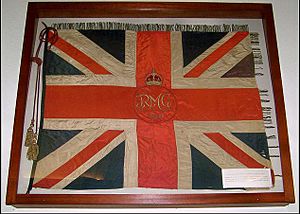 General Sir Arthur Currie officially opened Currie Hall at Royal Military College on 17 May 1922. General Sir Arthur Currie made the following comments, "I cannot tell you how utterly embarrassed and yet how inexpressibly proud I am to witness this ceremony, and to be present when this hall is officially opened. This hall is to commemorate the deeds of our fellow comrades whom it was my great honour and privilege to command during the latter years of the War." The Currie Hall is decorated with the crests and battle colours of every unit that fought in France during World War I.

His Excellency John Ralston Saul (February 2004) described the Currie Hall decorations, "This is an astonishing hall in which to speak. If you gaze up at the initials on the ceiling and at the paintings and the painted insignia around the walls, you are reminded that Canada is not a new country."... "Militarily speaking, we have been at it for a long time. This hall is a conceptualisation of our participation in the First World War. All of that grandeur and tragedy is pulled together here in a remarkable way. I'm not sure that we could reproduce a hall of this sort to describe our military experiences of the last half century."

The Memorial Arch, at the Royal Military College of Canada in Kingston, Ontario, built in 1923, is a monument which honours the memory of ex-cadets who have died in combat or while attending the College. The Memorial Arch, designed by John M. Lyle, is an example of the Beaux-Arts architecture. Lyle's design won a competition in which seven Canadian architects were invited to compete. Leigh French singles out the Memorial Arch as "an outstanding example of coherent purpose and well considered form, unlike many of the war memorial projects that emerged immediately after World War I". The Indiana limestone arch on a base of Quebec granite was built at a cost of $75,000.

The memorial includes the following texts:

The RMC Memorial Arch provides a list of officer cadets who were killed in action or died from wounds suffered in action under the following headings:

Two bronze plaques on the flanking plinths of the Arch, which were unveiled by the Governor General on 15 September 1949, commemorates the fallen from World War II. As required, names of those lost in Korea and on peacekeeping and other military operations have been added.

88mm gun monument at the Royal Military College of Canada.

88mm gun monument at the Royal Military College of Canada.

F-86 Sabre monument at the Royal Military College of Canada

There are numerous plaques erected by federal, provincial, municipal and private authorities on the grounds of the Royal Military College of Canada.

All content from Kiddle encyclopedia articles (including the article images and facts) can be freely used under Attribution-ShareAlike license, unless stated otherwise. Cite this article:
List of Royal Military College of Canada memorials Facts for Kids. Kiddle Encyclopedia.