List of drainage basins of Colorado facts for kids 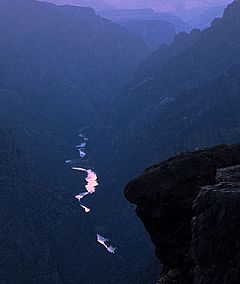 The Gunnison River in the Black Canyon.
Main page: Geography of Colorado

The U.S. state of Colorado includes the headwaters of several important rivers. The state is divided into two major hydrographic regions by the Continental Divide of the Americas. East of the Continental Divide, surface waters flow to the Gulf of Mexico, either via the Rio Grande or via one of several rivers (the South Platte River, the North Platte River, the Republican River, the Arkansas River, the Cimarron River, or the Canadian River) which eventually feed the Mississippi River along the way. West of the Continental Divide, surface waters flow via the Green River, the upper Colorado River (formerly the Grand River), or the San Juan River into the Colorado River and on to the Gulf of California. Colorado also has three significant endorheic basins: the San Luis Closed Basin in the San Luis Valley, and the Bear Creek Basin and the White Woman Basin spanning the Colorado-Kansas border north and south of the Arkansas River.

All content from Kiddle encyclopedia articles (including the article images and facts) can be freely used under Attribution-ShareAlike license, unless stated otherwise. Cite this article:
List of drainage basins of Colorado Facts for Kids. Kiddle Encyclopedia.