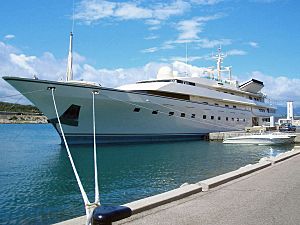 Prince Al-Waleed bin Talal (also spelled Waleed bin Talal) (Arabic: الوليد بن طلال بن عبد العزيز آل سعود‎code: ar is deprecated ; born 7 March 1955) is a member of the Saudi Royal Family. He is the nephew of the Saudi Arabian King Abdullah. An entrepreneur and international investor but without real political power within the House of Saud or in Saudi Arabia, he has amassed a fortune through investments in real estate and the stock market.

As of March 2010, his net worth is estimated at US$19.4 billion, up from $13.3 billion, according to Forbes, making him the 19th richest person in the world on their list published in March 2010. He has been nicknamed by Time magazine as the Arabian Warren Buffett.

Talal bought the super yacht Kingdom5KR. It had been owned by Donald Trump and called the "Trump Princess". The yacht, built in 1980, was used in the James Bond movie, Never Say Never Again. It has 11 cabins, can take 22 guests and has a crew of 31.

All content from Kiddle encyclopedia articles (including the article images and facts) can be freely used under Attribution-ShareAlike license, unless stated otherwise. Cite this article:
Alwaleed Bin Talal Facts for Kids. Kiddle Encyclopedia.