Culture of California facts for kids

Spain had explored the present state of California since the 16th century, although it did not colonize it and exert its cultural influence in earnest until the 18th century. By the 19th century, Spain had built missions throughout all the state and Californios owned huge land extensions (called "ranchos"). From that time to the present, Hispanic Californians have always been among the largest cultural groups in the state. Furthermore, Mexican immigration into California has also resulted in a large share of cultural contributions.

California culture has also been greatly influenced by several other large immigrant populations, especially those from Latin America and East Asia. California is a true melting pot as well as an international gateway to the United States.

California has long been a subject of interest in the public mind and has often been promoted by its boosters as a kind of paradise. In the early 20th Century, fueled by the efforts of state and local boosters, many Americans saw the Golden State as an ideal resort destination, sunny and dry all year round with easy access to the ocean, deserts and mountains. In the 1960s, popular music groups such as The Beach Boys promoted the image of Californians as laid-back, tanned beach-goers.

The California Gold Rush of the 1850s is still seen as a symbol of California's modern economic style, a pioneering spirit that tends to generate technology, social ventures, entertainment, and economic fads and booms that, in many cases, are followed all around the globe.

The hippie movement began in San Francisco, California, in the early 1960s and progressed into the late 1970s.

English is the main language of California's inhabitants. Spanish is a very common second language all over the state.

California English is a dialect of the English language spoken within California. California is the home to a highly diverse populace, and this is reflected in California's dialect of English, which integrates words from many other languages, especially Spanish. As is the case of English spoken in any state, not all features of California English are used by all speakers in the state, and not all features are restricted in use only to the state. However, there are some linguistic features which can be identified as either originally or predominantly Californian.

As the nation's major motion picture, and television entertainment center, Hollywood has influenced English throughout the world, by making English speakers of many dialects very visible and by making known new terms and new meanings. The media outlets and entertainment industry based in California also popularizes the California English accent and dialect to the rest of the country and the world.

The Indigenous Farmworker Study of 2007-2009 found 23 languages of Mexico and Mesoamerica spoken in California. 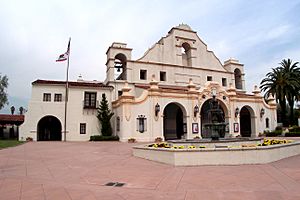 Apart from the architecture of the California missions and other colonial buildings, there are still many architectonic reminiscences of the Spanish period, especially in Southern California, where white stucco walls, red roof tiles, curvilinear gables, arched windows, balconies or even bell towers are incorporated into modern building styles in what is known as the Spanish Colonial Revival architecture, a United States architectural stylistic movement that came about in the early 20th century.

While Spanish architectural styles appear statewide, Northern Californian cities more prominently feature historic Victorian architecture, for which San Francisco is renowned, but which dominates the central historic districts of most Northern California towns. The towns of Eureka and Ferndale, in Humboldt County, are particularly noteworthy for their well-preserved Victorian building stock.

Today's architecture in California is a mixture of many other cultural influences that has resulted in groundbreaking modernist styles that have generated many other interesting and unusual building types. 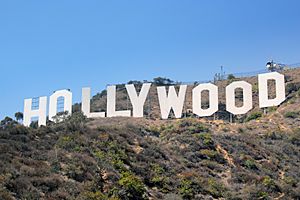 California is home to Hollywood (a district of the city of Los Angeles), the center of the American film industry, which has given rise to the popular fashion movie-star image and stereotypical life styles such as beach-dwelling surfers.

Hollywood has had a profound effect on culture all across the world since the early 20th century. During the so-called Golden Age of Hollywood, which lasted from the end of the silent era in American cinema in the late 1920s to the late 1950s, thousands of movies were issued from the Hollywood studios. The drive to produce a spectacle on the movie screen has largely shaped American cinema ever since. Spectacular epics which took advantage of new widescreen processes had been increasingly popular from the 1950s onwards.

Today, in spite of fierce competition from other countries and even other states within the US, California still rules the industry and its productions are screened all over the world, influencing the perception of fiction and even reality of millions of people from all parts of the globe.

The guitar was the instrument that the Mexican state of Alta California chose and two composers for the instrument are represented in the collection. Manuel Y. Ferrer's were collected in a book of 144 pages, called "Compositions and Arrangements for the Guitar" published in San Francisco in 1882, then reprinted in Boston by Oliver Ditson in 1915. Many of his pieces appear in the sheet music collection. An additional Californian artist, of the name of Luis T. Romero is represented his 1889 arrangement for guitar of La Paloma by Yradier.

In 1898, a collection called "Characteristic Songs of the Spanish Californians" was published as Canciones del Pais de California" in Santa Barbara.

California is the birthplace of a number of international renowned music genres, including:

Other well-known artists from California from genres which did not originate in the state include:

Notable authors who were either native to California or who wrote extensively about California include:

California boasts many notable museums, including:

Produce plays an important role in California cuisine. California encompasses many diverse climates and therefore is able to grow many types of produce. Additionally, California's Central Valley contains some of the most fertile soil in the world. California is the number one U.S. producer of many common fruits and vegetables, including broccoli, spinach, tomatoes and avocados, amongst others. A health-conscious culture also contributes to the popularity of fresh produce. Fruit festivals, such as the National Orange Show Festival in San Bernardino County, are common throughout the state.

Avocados play a special role in California cuisine and many popular California dishes integrate avocados and/or guacamole. Avocados were unfamiliar to most Americans until the mid-20th century, when growers of the subtropical fruit successfully convinced many Americans to try it. In California, avocado is commonly used in sandwiches, hamburgers, salads and even on pizza, in addition to tacos, and other Mexican foods.

California is also an important producer of tomatoes. California tomatoes have become a staple ingredient in ketchup, though ketchup was originally made with everything from plums to mushrooms.

With Napa Valley in the north, Santa Barbara, and the Temecula Valley in the southern part of the state, California is the world's fourth largest producer of wines, and accounts for 90 percent of the wine production in the United States. Originally started by Spanish settlers to create wine for Mass in the 18th century, the wine industry in California rivals other wine-producing countries of the world, such as France, Australia and Chile, even winning the Judgment of Paris wine competition.

California has a reputation for environmentalism. Californians, especially those living on the coasts, are viewed as being conscious of the natural environment and environmental issues in general. The environmental culture of California can be partly attributed to public outrage at the major oil spill in the Santa Barbara Channel in 1969. The influential social conditions resulting from this oil spill are explained in detail by environmental sociologist Harvey Molotch.

In 1965, California became the first state to regulate vehicle exhaust by setting limits on hydrocarbons and carbon monoxide emissions. In 1967, the California EPA set the nation's first air quality standards for total suspended particulates, photochemical oxidants, sulfur dioxide, nitrogen dioxide, and other pollutants. The United States Congress has allowed California to set its own pollution standards, and the state's legislators have responded with some of the strongest environmental laws ever passed.

More recently with the issue of global warming, some Californians are worried the ice caps are melting and thereby increasing the water levels particularly along the coast. Additionally, with warming trends at their present rates, experts generally agree that the Sierra Nevada snowpack, which is crucial to the state's drinking water, could decline by approximately 50 percent.

The state's proximity to the ocean influences many aspects of California culture and daily life. Surfing is an extremely popular sport in California,

In the 1960s, surfing became immensely popular due to surf rock bands like the Beach Boys, surf films like Bruce Brown's The Endless Summer, and Hollywood blockbusters like Gidget. Due to this mainstream surf culture explosion, surfing soon embodied the ideal Californian lifestyle and became a teen sensation as well as a sport. Malibu, California was at the heart of surf culture not only because it is a world-class surf spot, but also due to its youthful "beach" atmosphere and warm weather. Young men began strutting around the beach in boardshorts and women wore more revealing bikini swim suits, which, along with the surfboard, became symbols of beach culture. The surf culture boom of the 1960s soon led to an enormous increase of surfers at beaches around the country and helped surfing develop into the sport it is today.

Surfing (particularly in Southern California) has its own slang, which has coincided with Valspeak. Words like "tubular", "radical", and "gnarly" and the overuse of the word "like" are associated with both. In the late 1960s, Santa Cruz and Northern California developed their own slang like "groovy", "hella", and "tight".

Although unified as a single state, Northern California and Southern California share a notorious rivalry. "NorCal" or "SoCal" pride is a very large part of many residents' culture.

This has historically manifested through differences in regional dialect, as well as politics. Southern California has historically been more conservative in comparison to Northern California. Northern California has been more liberal, to the point that the term "San Francisco values" has become a well-established pejorative among conservatives in both state and national politics. One of the earliest examples of this divide was the 1860 Presidential election, in which Southern Democrat John C. Breckinridge won in the southern counties, while the more populous San Francisco Bay Area carried the state for Abraham Lincoln.

The rivalry also manifests itself prominently in the state's professional sports, and rivalries are especially heated between the following teams:

All content from Kiddle encyclopedia articles (including the article images and facts) can be freely used under Attribution-ShareAlike license, unless stated otherwise. Cite this article:
Culture of California Facts for Kids. Kiddle Encyclopedia.