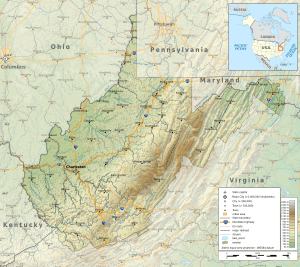 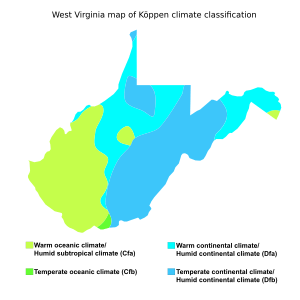 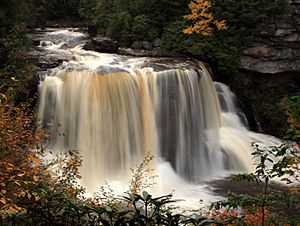 A portion of the Appalachian Mountains stretches into eastern West Virginia, and in the state's northeastern corner, Spruce Knob is officially regarded as the tallest mountain in the Allegheny Mountains, a vast section of the Appalachians. West Virginia covers an area of 24,229.76 square miles (62,754.8 km2), with 24,077.73 square miles (62,361.0 km2) of land and 152.03 square miles (393.8 km2) of water, making it the 41st-largest state in the United States. Generally, it is divided into four geographical regions: Ohio River Valley, Allegheny Plateau, Allegheny Highlands, and Potomac Section.

Prior to one billion years ago, the geologic history of West Virginia is obscure. Sometime between about 1,100 and 800 million years ago, lava was deposited in the extreme eastern part of the State forming our oldest exposed rock, the Catoctin Greenstone. Later, perhaps about 800 million years ago, a narrow trough began to form in extreme eastern West Virginia. An arm of the sea entered and sediments accumulated. As time went on, this shallow sea transgressed westward. By the end of Cambrian time, about 300 million years later, this shallow sea covered essentially all of West Virginia. Marine deposition took place throughout most of this and the succeeding Ordovician Period. During this total interval of about 370 million years, most of the rocks exposed in Jefferson and eastern Berkeley counties and in scattered areas southwestward along the Virginia boundary were deposited. Rocks of the same age are found in abundance in the deep wells throughout the State.

The Taconic Orogeny near the end of Ordovician time formed a high mountainous area east of West Virginia. During Middle and Late Devonian time the Acadian Orogeny, with the main uplift to the northeast, resulted in a further source for the predominantly clastic marine deposits of these epochs. However, near the end of Devonian time, the sea was rapidly retreating westward and the continental red beds of the Hampshire Formation were being deposited over most of the State.

The sea made one more important intrusion into West Virginia during Middle Mississippian time, approximately 330 million years ago, resulting in the deposition of the Greenbrier Formation, predominantly limestone, the last marine deposit of significance in the State. At the close of Mississippian time, about 310 million years ago, West Virginia was essentially a land area, subject to erosion. Early in the succeeding Pennsylvanian Period, the area dropped to near sea level and for more than 50 million years continued to sink at about the same rate that deposition was taking place. Permian Period, roughly 270 to 225 million years ago, the Appalachian Orogeny began which played a major part in the formation of the Appalachian Mountains as we know them today. Never again has the sea invaded West Virginia.

The oldest evidences of life found in West Virginia occur in rocks about 600 million years old, in the Antietam Formation of Lower Cambrian age. However, in this formation they are abundant and of forms that had already developed through a substantial part of all evolution that has taken place during the history of the earth. Evidences of life in other parts of the earth are found in rocks at least 3 billion years old. Fossils are found in increasing abundance and increasing stages of evolutional development in the rocks of all ages since earliest Cambrian time.

The life zones of West Virginia transitions from large low-land farming valleys bordered with forest and meadow to high-land ridge flats and heavy forestlands, some with rocky ridge-line peaks. The geology allows for a diversity of habitats. The "Mountain State" harbors at least 56 species and subspecies of mammals. The state has more than 300 types of birds and more than 100 species of fish. Many common Insects of the Eastern United States can be found in West Virginia. The state's beetle number about 15 species with more than 70 species of Odonate, some 18 species of spiders and a dozen species of Stonefly. There are about 17 Moth species. There are a little over seven dozen Cave invertebrate species. The West Virginia Division of Wildlife (WVDNR) uses hunting and fishing license fees for wildlife habitat conservation.

The Allegheny and Cumberland Plateaus of West Virginia are predominantly covered by hardwood forests, but along the Ohio River and its principal tributaries, the valuable timber has been removed and considerable areas have been wholly cleared over the centuries for farming and pasture lands. Among the most prevalent trees of this region are the chestnut oaks, the walnut, the yellow poplar, and the cherry. Southern West Virginia contains the largest reserve supply of timber. In the Ridge-and-Valley region of the Appalachian Mountains, the Eastern Panhandle and Potomac Highlands have a forest covering similar to that of the plateau region, however between these two areas of hardwood there is a long belt where spruce and white pine cover the mountain ridges. Other trees common in the state are the persimmon, sassafras, and, in the Ohio and Potomac Valley regions, the American sycamore. Hickory, chestnut, locust, maple, beech, dogwood, and pawpaw are widely distributed throughout the state as well. Among the state's common shrubs and vines are the blackberry, black and red raspberry, gooseberry, huckleberry, hazel, and wild grape. Ginseng is an important medicinal plant that is harvested primarily in West Virginia's southern regions. Wild ginger, elder, and sumach are common, and deep in the mountainous areas, rhododendrons, mountain laurel, and azaleas grow in abundance. 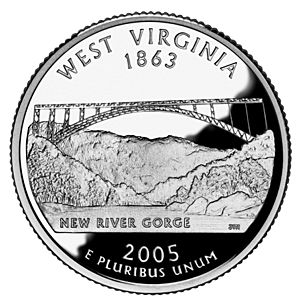 All content from Kiddle encyclopedia articles (including the article images and facts) can be freely used under Attribution-ShareAlike license, unless stated otherwise. Cite this article:
Environment of West Virginia Facts for Kids. Kiddle Encyclopedia.