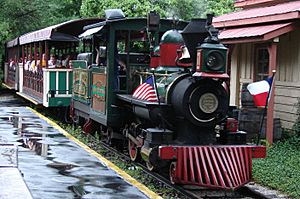 The name Six Flags, comes from the flags of the six different nations that have governed Texas: Spain, France, Mexico, the Republic of Texas, the United States of America, and the Confederate States of America. The original Six Flags park was (and still is) split into separate regions, such as the Spain and Mexico section which has Spanish-themed rides, attractions, and buildings.

All content from Kiddle encyclopedia articles (including the article images and facts) can be freely used under Attribution-ShareAlike license, unless stated otherwise. Cite this article:
Six Flags Facts for Kids. Kiddle Encyclopedia.