South Korea at the Olympics facts for kids

The first Korean athletes to win medals did so at the 1936 Summer Olympics in Berlin, when Sohn Kee-chung and Nam Sung-yong won gold and bronze respectively in the men's marathon. However, as Korea was under Japanese rule at that time, and, since both athletes were members of the Japanese team, the IOC credits both medals to Japan.

South Korea won its first medals as an independent nation at its first appearance in 1948, and won its first gold medal in 1976. South Korean athletes have won a total of 267 medals at the Summer Games, with the most gold medals won in archery, and 70 medals at the Winter Games, a majority in short track speed skating. The nation has won more medals in this winter sport than any other nation since it was introduced to the Olympic program in 1992.

During the 1998-2007 Sunshine Policy era, South Korea and North Korea symbolically marched as one team at the opening ceremonies of the 2000 and 2004 Olympics; but competed separately.

The Republic of Korea has hosted the Games on two occasions: 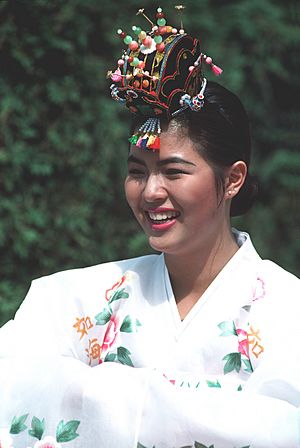 A South Korean volunteer at the Games of the XXIV Olympiad.

On 11 February 2014, Lee Sang-hwa won the gold medal for the women's 500m longtrack speedskating race at the 2014 Sochi Winter Olympics, having previously won the one at the 2010 Games. She became the third woman and first Korean woman to win back-to-back golds at the 500m.

Yuna Kim is the champion of figure skating, she won all the gold medals till 2010. Yoon Seongbin won a gold medal at Pyeongchang 2018, a skeleton for the first time and also became a skeleton king.

On November 2, 2018, officials from both North and South Korea announced that their countries would participate at the 2020 Summer Olympics, held in Tokyo, Japan, as a unified Korean team.

All content from Kiddle encyclopedia articles (including the article images and facts) can be freely used under Attribution-ShareAlike license, unless stated otherwise. Cite this article:
South Korea at the Olympics Facts for Kids. Kiddle Encyclopedia.