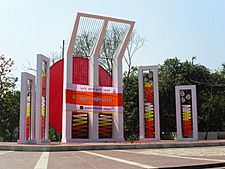 A monument in Dhaka

After years of negotiations, the Dhaka-Agartala bus was agreed upon on July 11, 2001 to connect Bangladesh with its eastern neighbour, the Indian state of Tripura, which has a substantial Bengali population and indigenous peoples who have close commercial and cultural links with the people of eastern Bangladesh.

All content from Kiddle encyclopedia articles (including the article images and facts) can be freely used under Attribution-ShareAlike license, unless stated otherwise. Cite this article:
Dhaka Facts for Kids. Kiddle Encyclopedia.