European Australians, or White Australians, are citizens or residents of Australia whose ancestry originates from the peoples of Europe and the Caucasus.

Other significant ancestries include Italian, German, Greek, Dutch, New Zealanders (European New Zealanders), Polish, Maltese and Croatian. Today, Australians of British and other European ancestries are the dominant majority in Australia, estimated at 85–92% of the total population.

Historically, European immigrants had great influence over Australian history and society, which resulted in the perception of Australia as a European country.

The first records of European mariners sailing into 'Australian' waters occurs around 1606, and includes their observations of the land known as Terra Australis Incognita (unknown southern land). The first ship and crew to chart the Australian coast and meet with Aboriginal people was the Duyfken captained by Dutchman, Willem Janszoon.

Between 1606 and 1770, an estimated 54 European ships from a range of nations made contact. Many of these were merchant ships from the Dutch East Indies Company and included the ships of Abel Tasman. Tasman charted parts of the north, west and south coasts of Australia which was then known as New Holland.

In 1770, Englishman Lieutenant James Cook charted the Australian east coast in his ship HM Barque Endeavour. Cook claimed the east coast under instruction from King George III on 22 August 1770 at Possession Island, naming eastern Australia 'New South Wales'. The coast of Australia, featuring Tasmania as a separate island, was mapped in detail by the English mariners and navigators Bass and Flinders, and the French mariner, Baudin. A nearly completed map of the coastline was published by Flinders in 1814.

This period of European exploration is reflected in the names of landmarks such as the Torres Strait, Arnhem Land, Dampier Sound, Tasmania, the Furneaux Islands, Cape Frecinyet and La Perouse. French expeditions between 1790 and the 1830s, led by D'Entrecasteaux, Baudin, and Furneaux, were recorded by the naturalists Labillardière and Péron. 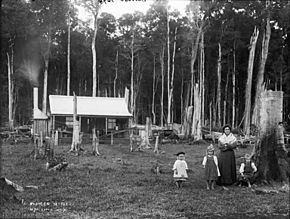 A pioneering settler family, circa 1900.

The British Crown Colony of New South Wales started with the establishment of a settlement at Sydney Cove by Captain Arthur Phillip on 26 January 1788. This date later became Australia's national day, Australia Day. These land masses included the current islands of New Zealand, which was administered as part of New South Wales. Van Diemen's Land, now known as Tasmania, was settled in 1803.

Other British settlements followed, at various points around the continent, most of them unsuccessful. In 1824, a penal colony was established near the mouth of the Brisbane River (the basis of the later colony of Queensland). In 1826, a British military camp was established in Western Australia at King George Sound, to discourage French colonisation. (The camp formed the basis of the later town of Albany.) In 1829, the Swan River Colony and its capital of Perth were founded on the west coast proper and also assumed control of King George Sound. Initially a free colony, Western Australia later accepted British convicts, because of an acute labour shortage.

The British Colonial Office in 1835 issued the Proclamation of Governor Bourke, implementing the legal doctrine of terra nullius upon which British settlement was based, reinforcing the notion that the land belonged to no one prior to the British Crown taking possession of it and quashing earlier treaties with Aboriginal peoples, such as that signed by John Batman. Its publication meant that from then, all people found occupying land without the authority of the government would be considered illegal trespassers.

Separate colonies were created from parts of New South Wales: South Australia in 1836, New Zealand in 1840, Victoria in 1851, and Queensland in 1859. The Northern Territory was founded in 1863 as part of South Australia. The transportation of convicts to Australia was phased out between 1840 and 1868.

Massive areas of land were cleared for agriculture and various other purposes, in addition to the obvious impacts this early clearing of land had on the ecology of particular regions, it severely affected indigenous Australians, by reducing the resources they relied on for food, shelter and other essentials. This progressively forced them into smaller areas and reduced their numbers as the majority died of newly introduced diseases and lack of resources. Indigenous resistance against the settlers was widespread, and prolonged fighting between 1788 and the 1930s led to the deaths of at least 20,000 Indigenous people and between 2,000 and 2,500 Europeans.

Irish formed about 25 per cent of the European Australian population in the nineteenth century. Germans formed the largest non-British community for most of the 19th century.

In 1976 the top six birthplace groups were from European countries and accounted for 81% of all people born overseas. By 1996, the top six groups only accounted for 53% of the total overseas-born population. People from the United Kingdom and Ireland still form the largest group. However, their number as a proportion of the total overseas-born population has declined, falling from 41% in 1976 to 29% in 1996.

Following World War II, the Australian government instigated a massive program of European immigration. After narrowly preventing a Japanese invasion and suffering attacks on Australian soil for the first time, it was seen that the country must "populate or perish". Prior to WWII, Australia had viewed itself as largely of British and Irish ancestry but after WWII the success of the United States and the reason for its success, that is largely the creation of a European diaspora, could not be ignored by Australia. Immigration brought traditional migrants from the United Kingdom along with, for the first time, large numbers of southern and central Europeans. A booming Australian economy stood in sharp contrast to war-ravaged Europe, and newly arrived migrants found employment in government-assisted programs such as the Snowy Mountains Scheme. Two million immigrants arrived between 1948 and 1975, many from Robert Menzies' newly founded Liberal Party of Australia dominated much of the immediate post war era, defeating the Australian Labor Party government of Ben Chifley in 1949. Menzies oversaw the post-war expansion and became the country's longest-serving leader. Manufacturing industry, previously playing a minor part in an economy dominated by primary production, greatly expanded. Since the 1970s and the abolition of the White Australia policy from Asia and other parts of the world, Australia's demography, culture and image of itself has been radically transformed.

In 1987, the vast majority of European Australians were descendants either of Anglo-Irish-Scots who arrived after 1850, or of Greeks, Italians, Hungarians, Balts, Poles and Germans who emigrated after 1945.

The table shows the European-Australian population with a gradual increase from the late nineteenth century to gradually declining in the late 20th century to the most recent census in 2011. Australia enumerated its population by race between 1911 and 1966, by racial-origin in 1971 and 1976, and by (ethnic) origin since 1981. In the 2011 Census, Australians reported around 300 different ancestries. The most commonly reported ancestries were British (45 per cent) and Australian (33 per cent). A further 6 of the leading 10 ancestries reflected the European heritage in Australia – Irish (9.7 per cent), Italian (4.3 per cent), German (4.2 per cent), Greek (1.8 per cent) and Dutch (1.6 per cent).

As the earliest colonists of Australia, settlers from England and their descendants often held positions of power and made or helped make laws often because many had been involved in government back in England. In the original six separate British self-governing colonies of Queensland, New South Wales, Victoria, Tasmania, South Australia, and Western Australia agreed to unite and form the Commonwealth of Australia, establishing a system of federalism in Australia. 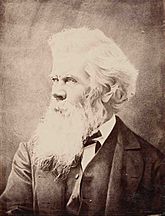 The lineage of most of the Founding Fathers was British (especially English) such as:

Various other founders of Australia have also been unofficially recognised: 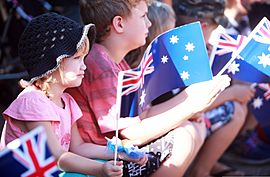 European-Australian culture is the culture of Australia. The culture of Australia is essentially a Western culture influenced by the unique geography of the Australian continent, the diverse input of Aboriginal, Torres Strait Islander and other Oceanian people, the British colonisation of Australia that began in 1788, and the various waves of multi-ethnic migration that followed. As the English were always the largest element among the settlers, their cultural influence was naturally greater than that of the Irish, Welsh or Scots. Evidence of a significant Anglo-Celtic heritage includes the predominance of the English language, the common law, the Westminster system of government, Christianity (Anglicanism) as the once dominant religion, and the popularity of sports such as cricket and rugby; all of which are part of the heritage that has shaped modern Australia. Australian culture has diverged significantly since British settlement.

Several states and territories had their origins as penal colonies, with the first British convicts arriving at Sydney Cove in 1788. Stories of outlaws like the bushranger Ned Kelly have endured in Australian music, cinema and literature. The Australian gold rushes from the 1850s brought wealth as well as new social tensions to Australia, including the miners' Eureka Stockade rebellion. The colonies established elected parliaments and rights for workers and women before most other Western nations.

Australian English began to diverge from British English after the founding of the colony of New South Wales in 1788 and was recognised as being different from British English by 1820. It arose from the intermingling of early settlers from a great variety of mutually intelligible dialectal regions of the British Isles and quickly developed into a distinct variety of English. Australian English differs from other varieties of English in vocabulary, accent, pronunciation, register, grammar and spelling.

The earliest form of Australian English was first spoken by the children of the colonists born into the colony of New South Wales. This first generation of children created a new dialect that was to become the language of the nation. The Australian-born children in the new colony were exposed to a wide range of dialects from all over the British Isles, in particular from Ireland and South East England.

The native-born children of the colony created the new dialect from the speech they heard around them, and with it expressed peer solidarity. Even when new settlers arrived, this new dialect was strong enough to blunt other patterns of speech.

A quarter of the convicts were Irish. Many had been arrested in Ireland, and some in Great Britain. Many, if not most, of the Irish convicts spoke either no English at all, or spoke it poorly and rarely. There were other significant populations of convicts from non-English speaking part of Britain, such as the Scottish Highlands and Wales.

The most commonly spoken European languages other than English in Australia are Italian, Greek and German. 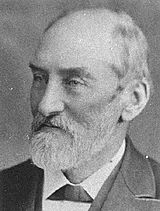 Another area of cultural influence are Australian Patriotic songs: 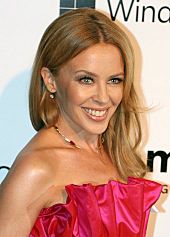 Singer Kylie Minogue is of Irish and Welsh descent.

Kylie Minogue has been recognised with several honorific nicknames including "Princess of Pop" and "Goddess of Pop". She is recognised as the highest-selling Australian artist of all time by the Australian Recording Industry Association (ARIA). Kylie was born to Ronald Charles Minogue and Carol Ann Jones in Melbourne, Australia, on 28 May 1968. Her father is a fifth generation Australian, and has Irish ancestry, while her mother came from Maesteg, Wales. 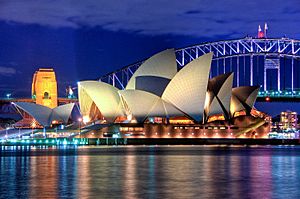 The Sydney Opera House was formally opened on 20 October 1973, by Queen Elizabeth II. After a gestation beginning with Utzon's 1957 selection as winner of an international design competition. The government of New South Wales, led by the premier, Joseph Cahill, authorised work to begin in 1958 with Utzon directing construction. The government's decision to build Utzon's design is often overshadowed by circumstances that followed, including cost and scheduling overruns as well as the architect's ultimate resignation.

All content from Kiddle encyclopedia articles (including the article images and facts) can be freely used under Attribution-ShareAlike license, unless stated otherwise. Cite this article:
European Australians Facts for Kids. Kiddle Encyclopedia.