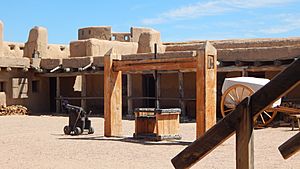 This is a list of forts and camps in Colorado, established by military, commercial and other interests.

The initial forts, built in the first half of the 19th century, were early communities of commerce between Native Americans, trappers, and traders. William Butler, who wrote about the fur trade in Colorado, stated that there were 24 trading posts built in the pre-territorial area of what is now Colorado. The trading posts were of varying sizes. Gantt's Post had several small wooden buildings located along Fountain Creek. Near Pueblo, Fort Le Duc (Buzzard's Roost) was a small settlement. Bent's Old Fort was a large adobe stockade on the Arkansas River. Multiple trading posts were built along a 13-mile stretch of the South Platte River in the late 1830s: Fort Jackson, Fort Lupton, and Fort Vasquez. In the early 1840s, the fur trade collapsed and most of the trading posts were closed, although some served early communities of miners and farmers. Bent's Old Fort continued to operate as it was located on the Santa Fe Trail, serving people from the United States and the New Spain areas of what is now New Mexico.

All content from Kiddle encyclopedia articles (including the article images and facts) can be freely used under Attribution-ShareAlike license, unless stated otherwise. Cite this article:
List of forts in Colorado Facts for Kids. Kiddle Encyclopedia.