Kids Encyclopedia Facts
This page is about the city. For the adjacent town, see Watertown (town), New York.

Watertown is a city in the state of New York and the county seat of Jefferson County. It is situated approximately 20 miles (35 km) south of the Thousand Islands, and 70 miles north of Syracuse, New York. As of the 2010 census, it had a population of 27,023, an increase of 1.2% since 2000. The U.S. Army post Fort Drum is near the city.

Named after the many falls located on the Black River, the city developed early in the 19th century as a manufacturing center. From years of generating industrial wealth, in the early 20th century the city was said to have more millionaires per capita than any other city in the nation.

Geographically, Watertown is located in the central part of Jefferson County. It lies 72 miles (116 km) northeast of Syracuse, New York and 31 miles (50 km) south of the Ontario border. The city is served by Watertown International Airport.

The city claims to be the birthplace of the five and dime store and the safety pin, and is the home of Little Trees air fresheners. It manufactured the first portable steam engine. It has the longest continually operating county fair in the United States and holds the Red and Black football franchise, the oldest surviving semi-professional team in the United States. 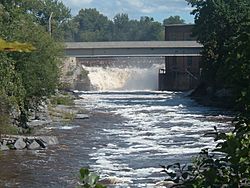 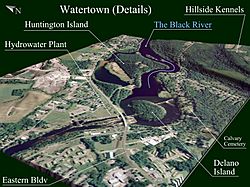 The city of Watertown was settled in 1800 by pioneers from New Hampshire, most notably Hart Massey, Henry Coffeen, and Zachariah Butterfield, part of a large migration into New York from New England after the American Revolutionary War. These pioneers chose the area due to the Black River. The pioneers' vision was for an industrial center that would draw power from the Black River. All the land was rough and unclear. Elevation was also a problem. The western end of the town was 12 to 15 feet (3.7 to 4.6 m) higher than the eastern end, with a large depression in the middle. A small stream also passed through the town.

The drop in the Black River at Watertown's location provided abundant water power for early industry. By the mid-19th century, entrepreneurs had built paper mills and major industries, including the first portable steam engine in 1847. In 1851, the city was joined to the state by the railroad. Other mills rapidly joined the business base and generated revenue to support early public works projects like the water system and illuminating gas works in 1853, and a telephone system in 1879.

Watertown claims that Rodman native Frank W. Woolworth conceived the idea of his mercantile chain while working there in 1878. Woolworth, employed as a clerk in Moore's Store, set up a successful clearance display of low-priced items. This led to his idea of a store specializing in fixed-price, cut-rate merchandise. Woolworth left Watertown and opened his first store in Utica, New York in 1879.

Among the many manufacturing businesses was the Davis Sewing Machine Company, which originated in Watertown. It was predecessor to George P. Huffman's Huffy Corporation (NYSE: HUF), now an American maker of bicycles and other sporting goods.

In 1805 Watertown became the county seat of Jefferson County, New York, and it was made an incorporated village in 1816. In 1869, Watertown was incorporated as a city. In 1920, the city adopted a city manager style of government. The Jefferson County Courthouse Complex is an example of the substantial architecture of the city, and is listed on the National Register of Historic Places. An early industrial city that earned great wealth for many of its citizens by the turn of the 20th century, Watertown also developed an educated professional class of doctors and lawyers.

A number of factors affected Watertown's progress. The economic center of the country kept moving west, and Chicago drew off many of its younger people for business and professional opportunities. Industrial technology shifted and jobs changed. In the deindustrialization of the mid-20th century, Watertown suffered economic and population declines.

The city has been working in recent decades to redevelop its downtown and revive the heart of the city. It is capitalizing on its rich architectural heritage, compact and walkable retail center, and well-designed residential areas.

Today the city serves as the commercial and financial center for a large rural area. It is the major community closest to Fort Drum and the post's large population. Since the city is located just 25 miles (40 km) from the international boundary via the Thousand Islands Bridge, shopping by Canadian visitors is an important part of the local economy.

Watertown, South Dakota was named in the city's honor. 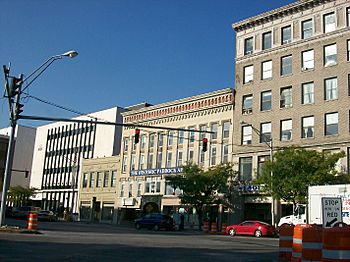 The Black River flows westward through the city toward Lake Ontario. The Black River is a world-renowned kayaking destination. Competition-level kayaking events, such as the Blackwater Challenge, have been held on the river.

By tradition, the city's name was derived from the abundant water power available from the river. Businesses harnessed water power to create one of the early industrial centers in New York. Paper mills were historically a major industry for the city and contributed to its 19th-century wealth.

Jefferson Community College (JCC) is located in the western part of the city near the fairgrounds.

Watertown has a humid continental climate (Köppen: Dfb), with cold, snowy winters and warm, wet summers. Unless otherwise noted, all figures cited below are from the GHCN station located closer to downtown.

Precipitation averages 43.1 inches (1,090 mm), and is distributed fairly uniformly throughout the year, with slightly more during autumn and slightly less during spring and late winter. Since Watertown is situated near the eastern edge of Lake Ontario, it receives a bountiful amount of lake-effect snow, averaging 112 inches (280 cm) of snowfall per winter.

All content from Kiddle encyclopedia articles (including the article images and facts) can be freely used under Attribution-ShareAlike license, unless stated otherwise. Cite this article:
Watertown (city), New York Facts for Kids. Kiddle Encyclopedia.