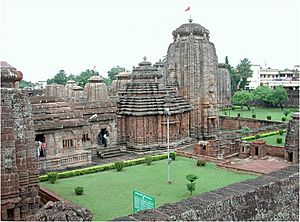 Bhubaneshwar is the capital city of the Indian state of Odisha. It is the largest city in Odisha. Bhubaneswar means "lord of the world". Many temples are present in this city. So, it is also called "Temple city of India". It is a religious centre in Orissa from the Middle Ages. It is a planned city of modern India.

In 1948, Bhubaneshwar became political capital of Odisha. Before this, it was Cuttack. Bhubaneshwar and Cuttack are together called "twin-cities" of Orissa.

All content from Kiddle encyclopedia articles (including the article images and facts) can be freely used under Attribution-ShareAlike license, unless stated otherwise. Cite this article:
Bhubaneshwar Facts for Kids. Kiddle Encyclopedia.