List of unincorporated communities in Oklahoma facts for kids 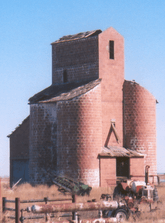 This innovative grain elevator was built circa 1920 near the small community of Ingersoll.

Driving Cattle to Pasture near Bliss.

Many unincorporated communities (such as Boggy Depot, Tuskahoma, and Skullyville) played important roles in the development of Oklahoma and others, especially those with schools and post offices, continue to be important centers in rural Oklahoma.

"Oklahoma Municipal Government" from the Oklahoma Almanac published by the Oklahoma Department of Libraries is the source document for this list. Additional communities have been added using Wikipedia articles which cite authoritative sources. Geographic coordinates, if known, are provided for those place names which are unlikely to be communities. 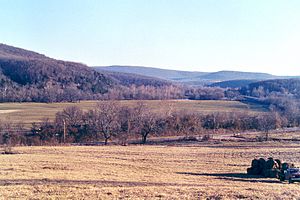 Bunch, Oklahoma, sets in the background near Sallisaw Creek in the Cookson Hills.

This abandoned W.S. Kelly gas station and general store in Cogar was used in a scene from the 1988 movie, Rainman. 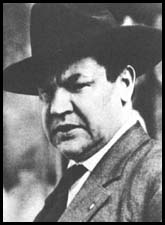 Ingalls, Oklahoma, was the site of a famous shoot-out between U.S. Marshals and the Doolin-Dalton Gang depicted in this scene from the 1915 silent film, The Passing of the Oklahoma Outlaws.

Salt, an important commodity in Indian Territory, was produced near the present community of McKey. 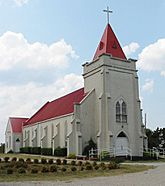 Sacred Heart, Oklahoma, the birthplace of author Tony Hillerman, was established in 1879 as a mission for the Pottawatomie Indians. 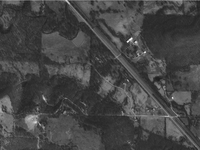 In this aerial view Tiawah nestles in the Tiawah Hills along State Highway 88 in Rogers County.

All content from Kiddle encyclopedia articles (including the article images and facts) can be freely used under Attribution-ShareAlike license, unless stated otherwise. Cite this article:
List of unincorporated communities in Oklahoma Facts for Kids. Kiddle Encyclopedia.