Corsair International is a French airline based at Orly Airport. They are the second largest airline in France and fly mainly holiday flights. 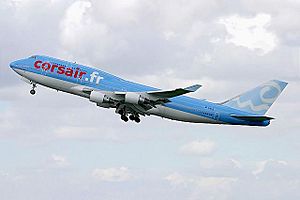 The airline was started in 1981 and has since been bought over by TUI AG, a German tour operator. Now all of Corsair International's aircraft have the uniform TUI colour scheme of a light blue body with white belly and red writing. These colours were put in place when the airline was called Corsairfly. A new scheme using blue and white colours will replace the current one.

Corsair International fly to lots of destinations from Paris. They concentrate on flights to the Caribbean and French speaking African countries.

All content from Kiddle encyclopedia articles (including the article images and facts) can be freely used under Attribution-ShareAlike license, unless stated otherwise. Cite this article:
Corsairfly Facts for Kids. Kiddle Encyclopedia.