Fauna of Ireland facts for kids 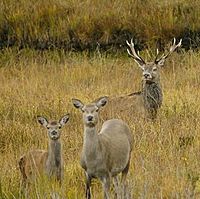 The red deer (Cervus elaphus) is Ireland's largest wild mammal and could be considered its national animal. A stag appeared on the old £1 coin. 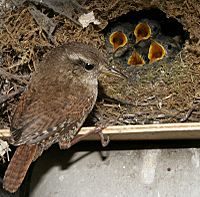 The wren (Troglodytes troglodytes) enjoys an exalted position as "King of All Birds" in Irish folklore, but is the villain in the tale of Saint Stephen

The fauna of Ireland comprises all the animal species inhabiting the island of Ireland and its surrounding waters.

This table uses figures supplied by the National Parks and Wildlife Service.

Only 26 land mammal species are native to Ireland, because it has been isolated from the European mainland (by rising sea levels after the Midlandian Ice Age), since about 14,000 BC. Some species, such as the red fox, European hedgehog, stoat, otter, pygmy shrew, and badger are common, whereas others, like the Irish hare, red deer, and pine marten are less common and generally seen only in certain national parks and nature reserves around the island. Some introduced species have become thoroughly naturalised, e.g. the European rabbit, grey squirrel, and brown rat. In addition, ten species of bat are found in Ireland.

For more details, see List of reptiles of Ireland

The viviparous lizard is the only land reptile native to Ireland.

Only one land reptile is native to the country, the viviparous lizard. It is common in national parks, particularly in the Wicklow Mountains. Slow-worms are common in parts of The Burren area in County Clare, but they are not a native species and were probably introduced in the 1970s. Five marine turtle species appear regularly off the west coast, the leatherback, green, hawksbill, loggerhead, and Kemp's ridley, but they very rarely come ashore.

Legend attributes the absence of snakes in Ireland to Saint Patrick, who is said to have banished them from the island, chasing them into the sea after they assailed him during a 40-day fast he was undertaking on top of a hill. In reality, no species of snake ever inhabited Ireland, due to it losing its land-bridge to Britain before snakes came north after the Ice Age.

For more details, see List of amphibians of Ireland

Three amphibians are found in Ireland, the common European brown frog, the smooth newt, and the natterjack toad. There are questions over whether the frog is actually native to Ireland, with some historic accounts stating that the frog was introduced in the 18th century. The natterjack toad is only found in a few localised sites in County Kerry and western County Cork. For atlases see Atlases of the flora and fauna of Britain and Ireland. 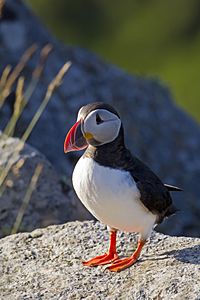 The Atlantic puffin is a migratory bird to Ireland, common at coastal areas.

About 400 bird species have been recorded in Ireland. Many of these species are migratory. There are Arctic birds, which come in the winter, and birds such as the swallow, which come from Africa in the summer to breed. Many birds which are common residents in Britain and continental Europe are rare or unusual in Ireland, examples include the tawny owl, willow tit, marsh tit, nuthatch, and all woodpecker species except the recently established great spotted woodpecker. These are birds which do not move great distances and their absence may be due to Ireland's early isolation, but also Ireland's mild weather means early breeding and choice of best habitats which gives residents an advantage over visitors. 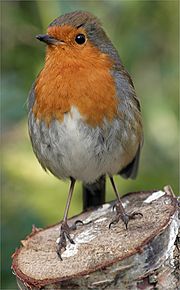 The European robin is a year-round resident in Ireland.

The wren, robin, blackbird, and common chaffinch are the most widespread species, occurring in 90% of the land area. These and the rook, starling, great tit, and blue tit are among the most numerous and commonly seen. Over the period 1997-2007, populations of pigeons, warblers, tits, finches, and buntings have remained stable or shown an increase (there were massive declines during the 1970s). Kestrel, common swift, skylark, and mistle thrush have continued to decline due to changes in agricultural practices such as increased use of pesticides and fertiliser. Climate change has also played a role. For atlases see Atlases of the flora and fauna of Britain and Ireland

Ireland has a rich marine avifauna, with many large seabird colonies dotted around its coastline such as those on the Saltee Islands, Skellig Michael, and the Copeland Islands. Also of note are golden eagles, recently reintroduced after decades of extinction (Golden Eagle Reintroduction Programme in County Donegal). Another conservation effort is habitat management to encourage the red-necked phalarope. 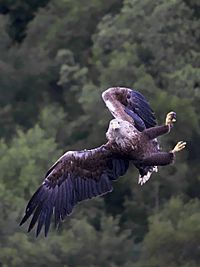 The white-tailed eagle, re-introduced in 2007 following a 200-year absence from Ireland.

South-eastern Wexford is an important site for birds - the north side of Wexford Harbour, the North Slob, is home to 10,000 Greenland white-fronted geese each winter (roughly one third of the entire world's population), while in the summer Lady's Island Lake is an important breeding site for terns, especially the roseate tern. Three quarters of the world population of pale bellied brent geese winter in Strangford Lough in County Down.

In 2001, the golden eagle was reintroduced into Glenveagh National Park after a 90-year absence from Ireland. A total of 46 golden eagles have been released in Ireland since 2001. In 2007, the first golden eagle chick hatched in Ireland since re-introduction. In 2006, 30 red kite birds originally from Wales were released in the Wicklow Mountains. Six weeks later one was shot dead, it was found to have 8 shotgun pellets in it. The first red kite chick hatched in 2010. In 2007, the white-tailed eagle returned to Ireland with six young birds being released in Killarney National Park after an absence of over 200 years from Ireland. Fifteen of these birds have been released in total. There are plans for the common crane to also return to Ireland in the future. While the osprey and marsh harrier have slowly returned to Ireland naturally.

Ireland has 375 fish species in its coastal waters and 40 freshwater species in its rivers and lakes. Most of these are pelagic. There are many aquatic mammals too, such as bottlenose dolphins, killer whales, and harbour porpoises. Sea turtles are also common off the western seaboard, and the walrus has also been found around the Irish coasts, but is very rare with only a handful of sightings. The cool, temperate waters around Ireland contain a huge variety of marine invertebrates Some of this diversity can be observed in tide pools. 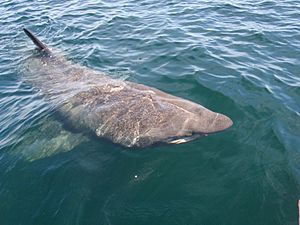 The Porcupine Abyssal Plain which has an average depth of 4,774 m is on the continental margin southwest of Ireland. It is the habitat for many deep sea fish and was first investigated in the summers of 1868 and 1869 by Charles Wyville Thomsons H.M.S. Porcupine expedition. Other notable fish include the basking shark, ocean sunfish, conger eel, hagfish, boarfish (Capros aper), large-eyed rabbitfish, lumpsucker, cuckoo wrasse, and the thresher shark.

In a study of the marine fauna of the Celtic Sea based on 61 beam trawl catches, the common dragonet and the hermit crab Pagurus prideaux were the most ubiquitous species. 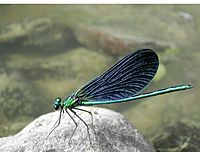 Calopteryx virgo Found only in the South of Ireland.

There are an estimated 11,500 species of insect recorded in Ireland (11,422 actual at October 2010: in well-known groups 1,400 of these moths, 33 species of dragonflies/damselflies and 34 species of butterfly). Many more remain to be found. Six checklists of the Irish insect fauna have been published to date-Coleoptera, Lepidoptera, Diptera, Hymenoptera and Hemiptera and small orders The history and rationale of the lists is detailed by O'Connor Spiders are represented by 378 species Literature on other Irish land invertebrates can be accessed on using the key words search facility. The site is regularly updated but gaps still exist.

The aquatic insect fauna is listed by Ashe et al.

Species that have become extinct in Ireland in historic times include the great auk, the Irish elk, the European beaver, brown bear, gray whale and the wildcat. The last gray wolf in Ireland was killed by John Watson of Ballydarton, County Carlow in 1786. Many bird of prey species including the golden eagle, white-tailed eagle, and red kite have been re-introduced to national parks after absences between 90–200 years.

These are the Natural History Museum Dublin which opened in 1856 and the Ulster Museum in Belfast which opened in 1929. Ireland's universities hold smaller collections. Trinity College Dublin also has a Zoological museum that is open during the summer months.

In 2000, scientists in Ireland commenced a research programme called "Ag-Biota", concerning the impact of modern agriculture on biodiversity.

An early (1180) account of the fauna is given by Gerald of Wales in Topographia Hibernica and in 1652 Gerard Boate's Natural History of Ireland was published. Also in the 17th century Thomas Molyneux made observations. The Clare Island Survey (1909–11) organised by Robert Lloyd Praeger was the first comprehensive biological survey carried out in the world. It became a model for studies elsewhere.

Composition of the fauna

Details of the composition of the Irish fauna by group are given by Ferriss, S. E., Smith, K. G. and Inskipp, T. P.(editors), 2009 Irish Biodiversity: a taxonomic inventory of fauna. Online here: [1]. Not up to date for all taxa.

All content from Kiddle encyclopedia articles (including the article images and facts) can be freely used under Attribution-ShareAlike license, unless stated otherwise. Cite this article:
Fauna of Ireland Facts for Kids. Kiddle Encyclopedia.