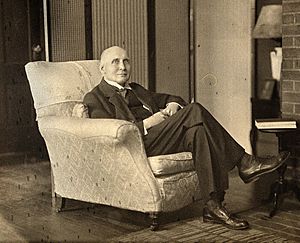 Alfred North Whitehead, OM (15 February 1861 – 30 December 1947) was an English mathematician who became a philosopher. He was born in Ramsgate, Kent, and died in Cambridge, Massachusetts, USA. He wrote on algebra, logic, foundations of mathematics, philosophy of science, physics, metaphysics, and education. He is the co-author, with Bertrand Russell, of the important Principia Mathematica.

All content from Kiddle encyclopedia articles (including the article images and facts) can be freely used under Attribution-ShareAlike license, unless stated otherwise. Cite this article:
Alfred North Whitehead Facts for Kids. Kiddle Encyclopedia.