Hayward (/ˈheɪwərd/; formerly, Haywards, Haywards Station, and Haywood) is a city located in Alameda County, California in the East Bay subregion of the San Francisco Bay Area. With a 2014 population of 149,392, Hayward is the sixth largest city in the Bay Area and the third largest in Alameda County. Hayward was ranked as the 37th most populous municipality in California. It is included in the San Francisco-Oakland-Fremont Metropolitan Statistical Area by the US Census. It is located primarily between Castro Valley and Union City, and lies at the eastern terminus of the San Mateo-Hayward Bridge. The city was devastated early in its history by the 1868 Hayward earthquake. From the early 20th century until the beginning of the 1980s, Hayward's economy was dominated by its now defunct food canning and salt production industries.

Human habitation of the greater East Bay, including Hayward, dates from at least 4000 B.C. The most recent pre-European inhabitants of the Hayward area were the Native American Ohlone people.

In the 19th century, the land that is now Hayward became part of Rancho San Lorenzo, a Spanish land grant to Guillermo Castro in 1841. The site of his home was on the former El Camino Viejo, or Castro Street (now Mission Boulevard) between C and D Streets, but the structure was severely damaged in the 1868 Hayward earthquake, with the Hayward Fault running directly under its location. Most of the city's structures were destroyed in the earthquake, the last major earthquake on the fault. In 1930, that site was chosen for the construction of the City Hall, which served the city until 1969.

William Dutton Hayward arrived during the gold rush and "squatted", started building a house, next to the creek at the site of the old Polamares School. Guillermo Castro's Vaqueros came by one day and told Hayward to get off of Castro's property. William did leave, but went to Guillermo Castro directly and asked to buy a piece of his land. Castro sold him the area of what was east of Castro Street, now Mission Blvd and north side of A Street. William Hayward built a grand hotel on the property. He and his wife ran the hotel, which eventually burned to the ground around 1916.

Hayward was originally known as "Hayward's", then as "Haywood", later as "Haywards", and eventually as "Hayward". There is some disagreement as to how it was named. Most historians believe it was named for William Dutton Hayward, who opened a hotel there in 1852. The U.S. Geological Survey Geographic Names Information System states the city was named after Alvinza Hayward, a millionaire from the California Gold Rush. Regardless of which Hayward the area was named for, the name was changed to "Haywood" when the post office was first established in 1860.

Castro emigrated to Chile with most of his family in 1864, after he lost his land in a card game. His name survives in the community of Castro Valley, located in the valley next to Hayward, which Castro used to pasture his cattle. The ranch was split up and sold to various locals, William Hayward among them. William Hayward's fortunes took a turn for the grander when he constructed a resort hotel, which eventually grew to a hundred rooms. The surrounding area came to be called "Hayward's" after the hotel.

William Hayward eventually became the road commissioner for Alameda County. He used his authority to influence the construction of roads in his own favor. He was also an Alameda County supervisor. In 1876, a town was chartered by the State of California under the name of "Haywards". The name of the post office was then able to change because of the loss of the apostrophe before the "s". This change occurred in 1880. It remained "Haywards" until 1910 when the "s" was officially dropped. William Hayward died in 1891. 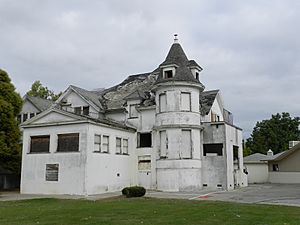 Hayward grew steadily throughout the late 19th century, with an economy based on agriculture and tourism. Important crops were tomatoes, potatoes, peaches, cherries, and apricots. Hunt Brothers Cannery opened in 1895. Chicken and pigeon raising also played important roles in the economy. A rail line between Oakland and San Jose, the South Pacific Coast Railroad, was established, but was destroyed in the 1868 earthquake. the Hayward shore of the Bay was developed into extensive salt evaporation ponds, and was one of the most productive areas in the world, with Leslie Salt one of the largest companies.

The first San Mateo–Hayward Bridge opened in 1929, connecting the city to the San Francisco Peninsula.

During the 1930s, the Harry Rowell Rodeo Ranch, now within the bounds of Castro Valley, drew rodeo cowboys from across the continent, and western movie actors such as Slim Pickens and others from Hollywood. 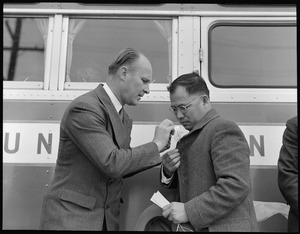 Prior to World War II, Hayward had a high concentration of Japanese Americans, who were subject to the Japanese-American internment during the war. The war brought an economic and population boom to the area, as factories opened to manufacture war material. Many of the workers stayed after the end of the war. Two suburban tract housing pioneers, Oliver Rousseau and David D. Bohannon, were prominent builders of postwar housing in the area.

The Hayward Area Recreation and Park District was formed in 1944.

California State University, Hayward opened in the Hayward Hills in 1957. Southland Mall was dedicated in 1964.

The second San Mateo–Hayward Bridge opened in 1967. The City Center Building opened in 1969, and acted as the new city hall until 1989, when the 1989 Loma Prieta earthquake damaged the building and forced the city government to move out. The building was closed to the public in 1998, with the new Hayward City Hall opening the same year.

BART began operating in the Bay Area in 1972, with stations in downtown Hayward and south Hayward.

The Hunt Brothers Cannery closed in 1981. The Russell City Energy Center began operating in 2013 at the Hayward shoreline.

The city's downtown area was slated for redevelopment in 2012 and 2013, with landscaping, new businesses opening up, and older ones getting facade upgrades.

Warren Hall on the California State University, East Bay campus was demolished in 2013.

In May 2015, the city's former shoreline landfill was declared a site for conversion to a solar farm, set to generate enough electricity to power 1,200 homes. It will be one of 186 sites in the Regional Renewable Energy Procurement Project.

Mount Eden was a former city that was incorporated into Hayward in the 1950s, at the same time as Schafer Park.

Russell City was a former unincorporated community. It existed from 1853 until 1964. It is now the location of an industrial park. The Russell City Energy Center, a 429 megawatt natural gas-fired power plant, built by Calpine, is located there.

The Hayward Fault Zone runs through much of Hayward, including the downtown area. The United States Geological Survey has stated that there is an "increasing likelihood" of a major earthquake on this fault zone, with potentially serious resulting damage.

Hayward has a Mediterranean climate, and contains microclimates, both of which are features of the greater Bay Area. In 2012, the USDA rated Hayward as a zone 10A climate.

The city created the Hayward Public Art Program in 2008, to create murals to beautify the city and combat graffiti, and has commissioned numerous murals throughout the city. The program won a League of California Cities Helen Putnam Award of Excellence in 2011. 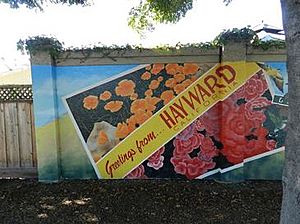 Hayward has been a Tree City USA since 1986. Hayward declared itself a nuclear-free zone, a largely symbolic act, in 1987. The city is the setting for the Hayward Gay Prom, one of the earliest and longest running gay proms in the United States. The city introduced road signs in 2015 encouraging better behavior while walking or driving, using humorous phrases like "It's a speed limit, not a suggestion."

Many of Hayward's cultural landmarks and points of interest are in its downtown area. Three city hall buildings have been built: Hayward City Hall; the City Center Building, an abandoned 11-story building and Hayward's second city hall; and the first city hall at Alex Giualini Plaza, whose architectural motifs form the current city logo.

Other downtown features include the Hayward Area Historical Society museum, which relocated and re-opened in June 2014; Buffalo Bill's Brewery, one of the first brewpubs in California; and Cinema Place, Hayward's only movie theatre, with associated murals and an art gallery. Many of the Hayward Public Art Program murals are located downtown.

See also: List of buildings and structures in Hayward, California

Hayward has two sites in the National Register of Historic Places (NRHP): the Green Shutter Hotel and Eden Congregational Church. A third site, Meek Mansion (also in the NRHP), while not within city limits, is managed by HARD and the Hayward Area Historical Society. The three sites are also on the California Register of Historical Resources. Agapius Honcharenko's Ukraina Ranch is the only California Historical Landmark in the city. 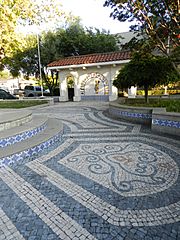 Hayward has four parks administered by the East Bay Regional Park District: the Don Castro Regional Recreation Area, Dry Creek Pioneer Regional Park, the Hayward Regional Shoreline, and Garin Regional Park. The Eden Landing Ecological Reserve is located at the Hayward shoreline, and includes 600 acres of salt ponds set to be converted to tidal wetlands. Hayward is also home to the oldest Japanese garden in California designed along traditional lines. The 3.5 acre Japanese Gardens was dedicated in 1980. The garden is administered by the Hayward Area Recreation and Park District (HARD), which operates a number of parks and facilities, primarily in Hayward, including Kennedy Park, the Sulphur Creek Nature Center, the Hayward Shoreline Interpretive Center, and Memorial Park with the Hayward Plunge swim center. HARD is the largest recreation district in California.

Hayward is the sister city of:

All content from Kiddle encyclopedia articles (including the article images and facts) can be freely used under Attribution-ShareAlike license, unless stated otherwise. Cite this article:
Hayward, California Facts for Kids. Kiddle Encyclopedia.