Mythic Warriors (also known as Mythic Warriors: Guardians of the Legend) is a 1998-2000 animated television series, which featured retellings of popular Greek myths that were altered so as to be appropriate for younger audiences, produced by Nelvana and Marathon Media. Two seasons of episodes were produced in 1998 and 1999; then aired as reruns until 2000, when CBS' abolition of its children's programming resulted in its cancellation. The series was based on the book series Myth Men Guardians of the Legend written in 1996 and 1997 by Laura Geringer and illustrated by Peter Bollinger.

The series was a fixture of CBS' Saturday-morning cartoon lineup. Scottish Television screened the series as part of its children programme Inside Out. The show was repeat in 2009 on wknd@stv, which is a children's television strand on Scottish television channel, then on Saturday mornings on STV during 2010. The series has been translated into Scottish Gaelic and is broadcast on BBC Alba since 2010.

Most of the characters in the show are portrayed with their original Greek names, with a few Romanized exceptions (e.g. Hercules, Ulysses).

Myth Men Guardians of the Legend is a book series written in 1996 and 1997 by Laura Geringer and illustrated by Peter Bollinger. It is a comic series targeted at children age 4-8 and published by Scholastic Books, Inc. It received the Children's Choice award.

The series includes both male and female mythical heroes, including Perseus, Hercules, Odysseus, Theseus, Andromeda and Atalanta. The books retell the actual myths and legends with added fantasy elements. 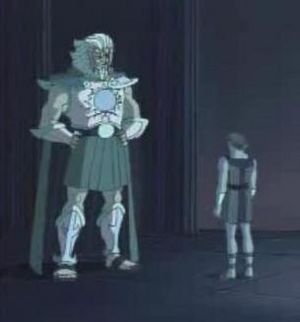 The sun god Helios and his demigod son, Phaeton.

This show is well known for its unique depictions of the Greek gods. Most were shown as gigantic (approximately 10–12 feet tall) humanoids possessing immortality, the abilities to fly and teleport, supernatural powers of a magical nature (as opposed to cosmic), and the ability to alter their appearances at will; including reducing themselves to the size of a typical human, as well as completely altering their looks, voices, and even gender. When in their natural form, an echo would accompany their voice whenever they spoke.

Instead of classic attire resembling that of human nobility often employed during Hellenic times, the Olympians were instead depicted as wearing brightly colored clothing more typical of a warrior's formal attire, the exceptions being Hera, Demeter, and Hephaestus.

Between the first and second seasons, the depictions of several gods changed. Hades' attire was slightly altered. Persephone aged from a teenage-looking young girl to a grown goddess. The most significant changes, however, were to Aphrodite and Athena; the former shifted from a giggling pencil-thin schoolgirl-like teenager, to a conniving goddess, with an entirely different voice and manner of speech as well. Athena was altered from a blonde in monotonous silver armor; to a brunette cloaked in blood-red dual-split dress with matching cape, plus golden shin guards and arm-bands in addition. Despite the complete change in depiction, her voice did remain the same.

Gods who made cameo appearances

All content from Kiddle encyclopedia articles (including the article images and facts) can be freely used under Attribution-ShareAlike license, unless stated otherwise. Cite this article:
Mythic Warriors Facts for Kids. Kiddle Encyclopedia.