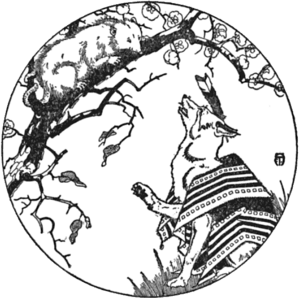 Coyote and Opossum appear in the stories of a number of tribes.

The mythologies of the indigenous peoples of North America comprise many bodies of traditional narratives associated with religion from a mythographical perspective. Indigenous North American belief systems include many sacred narratives. Such spiritual stories are deeply based in Nature and are rich with the symbolism of seasons, weather, plants, animals, earth, water, sky and fire. The principle of an all embracing, universal and omniscient Great Spirit, a connection to the Earth, diverse creation narratives and collective memories of ancient ancestors are common. Traditional worship practices are often a part of tribal gatherings with dance, rhythm, songs and trance (e.g. the sun dance). 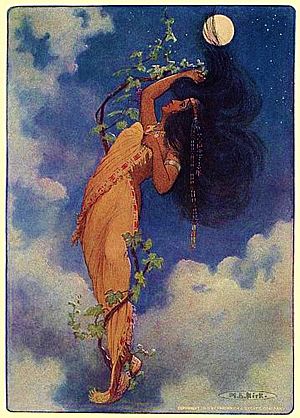 From the full moon fell Nokomis - from The Story of Hiawatha, 1910

Northwestern US and Western Canada

Uto-Aztecan (Southwestern US and Mexico)

All content from Kiddle encyclopedia articles (including the article images and facts) can be freely used under Attribution-ShareAlike license, unless stated otherwise. Cite this article:
Native American mythology Facts for Kids. Kiddle Encyclopedia.