The Town of North Hempstead is one of three towns in Nassau County, New York, USA. As of the 2010 census, the town population was 226,322.

The town occupies the northwest part of the county. Its Supervisor is Judi Bosworth, a former Nassau County legislator, who was inaugurated on Jan. 1, 2014. A Democrat, she succeeded Interim Supervisor John B. Riordan, the former Nassau County Surrogate, who served since the resignation of Jon Kaiman on Sept. 23, 2013 to work for Gov. Andrew Cuomo. Bosworth is the fifth consecutive Democrat to head the former Republican stronghold since Ben Zwirn was elected in 1989.

The area was first settled by Europeans around 1643 and became part of the town of Hempstead. During the American Revolution the southern part of Hempstead was primarily Tory, while the northern part, having been settled by Yankees, supported the revolution. Following the war, the Town of North Hempstead was split off in 1784.

According to the "Our History" series in the Long Island-based newspaper, Newsday,

In September, 1775, almost a year before the future nation declared its independence from George III, the people of Great Neck, Cow Neck and other areas north of Old Country Road signed their own Declaration of Independence.

The signers, passionate Patriots, declared their independence from the Town of Hempstead, which, in their opinion, had the bad habit of pledging allegiance to the king. Therefore, the northern necks declared themselves 'an entire separate and independent beat or district.' The 'beat' would officially become the Town of North Hempstead in 1784.

During the Revolution, the northern Patriots had their own militia headed by Capt. John Sands of Cow Neck (now Port Washington), which invaded South Hempstead in search of arms. The rift caused a north-south animosity that would take years to heal.

The first North Hempstead Town Board, headed by Patriot Adrian Onderdonk, had to cope with an impoverished area, devastated by an avenging British occupation. The councilmen met in Roslyn taverns and didn't get a permanent home until 1907, when the present town hall opened in Manhasset.

North Hempstead became more affluent with the opening of the Long Island Rail Road through to Great Neck, and the inauguration of steamboat service from Manhattan in 1836.

The town of North Hempstead is made up of 30 incorporated villages that had the right to set zoning restrictions to protect their rights and resources. No new villages have been created since 1936, when a revised county charter denied zoning power to future villages. There are also some unincorporated areas in the town of North Hempstead that are not part of villages.

North Hempstead is the only town on Long Island that does not have a corresponding hamlet or village in its borders with the same name; Hempstead and Oyster Bay in Nassau County and the towns of Huntington, Babylon, Islip, Smithtown, Brookhaven, Riverhead, Southold, Southampton, Shelter Island and East Hampton in Suffolk County all have smaller subdivisions with the same name. 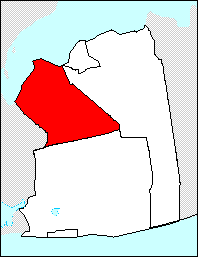 The west town line is the border of Queens County, New York, part of New York City. The north town line, delineated by Long Island Sound, is the border of Bronx County and Westchester County. The town of Oyster Bay is the eastern neighbor.

There were 76,820 households out of which 33.6% had children under the age of 18 living with them, 64.0% were married couples living together, 8.9% had a female householder with no husband present, and 23.9% were non-families. 20.6% of all households were made up of individuals and 10.3% had someone living alone who was 65 years of age or older. The average household size was 2.84 and the average family size was 3.27.

In addition, there is a small area immediately west of Great Neck Gardens that is not part of any incorporated village or census-designated place.

The Long Island Rail Road's Oyster Bay Branch serves the town's vicinity from Mineola to Greenvale. The Main Line runs through the southern parts of the town from with stations at Merillon Avenue in Garden City Park through Westbury. The Port Washington Branch runs along the northern part of the town and uses stations from Great Neck across the Manhasset Viaduct into Port Washington.

All content from Kiddle encyclopedia articles (including the article images and facts) can be freely used under Attribution-ShareAlike license, unless stated otherwise. Cite this article:
North Hempstead, New York Facts for Kids. Kiddle Encyclopedia.