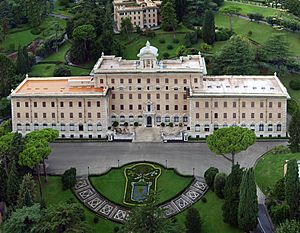 A city-state is a city that has its own sovereignty. There were many important city-states in ancient Greece. Nowadays, cities may have differing degrees of self-governance. In order to be considered a city-state, a city must govern itself independently, by regulating its own taxes, or having independent representation at the United Nations.

Monaco-Ville and Monte Carlo are districts in Monaco, not separate towns or cities. The city boundary is the same as the country's boundary.

Singapore was independent before becoming part of the federal kingdom of Malaysia. It is now independent again.

The smallest country in the world was created in 1929. The Vatican City is completely surrounded by the city of Rome, Italy, and is the headquarters of the Roman Catholic Church.

City states in other countries

Germany has 16 Bundesländer and three of them are city-states; they are Berlin, Hamburg and Bremen. They do not have a Minister President (prime minister) like the other Bundesländer. Instead their head of government is called a Mayor in English.

Vienna is a federal state.

Spain has two small territories in north Africa. Spanish law calls them autonomous communities. They are

The British colony of Gibraltar is a city state

All content from Kiddle encyclopedia articles (including the article images and facts) can be freely used under Attribution-ShareAlike license, unless stated otherwise. Cite this article:
City-state Facts for Kids. Kiddle Encyclopedia.