Her 1967 song "Dumb Blonde" was heard by country singer Porter Wagoner, and he asked Parton to be a part of his television show. Her single "Jolene" reached number one in 1974, becoming a solo artist, though still performed and recorded with Wagoner.

Parton is one of the most famous country artists in the world.

Parton is the fourth of 12 children; her siblings in order are Willadeene, David, Denver, Bobby, Stella, Cassie, Randy, Larry, Floyd, Frieda, and Rachel.

On May 30, 1966, Parton and Carl Thomas Dean (born (1942-07-20)July 20, 1942, in Nashville, Tennessee) were married in Ringgold, Georgia. Although Parton does not use Dean's surname professionally, she has stated that her passport says "Dolly Parton Dean" and that she sometimes uses Dean when signing contracts. Dean, who is retired from running an asphalt road-paving business in Nashville, has always shunned publicity and rarely accompanies his wife to any events. According to Parton, he has seen her perform only once. She also has said in interviews that, although it appears they spend little time together, it is simply that nobody sees him publicly. She has commented on Dean's romantic side, saying that he does spontaneous things to surprise her and sometimes even writes poems for her. In 2011 Parton said, "We're really proud of our marriage. It's the first for both of us. And the last."

On May 6, 2016, Parton announced that she and her husband would renew their vows in honor of their 50th wedding anniversary later in the month.

Parton and Dean helped raise several of Parton's younger siblings in Nashville, leading her nieces and nephews to refer to her as "Aunt Granny," a moniker that later lent its name to one of Parton's Dollywood restaurants. The couple have no children of their own, but Parton is the godmother of performer Miley Cyrus.

Since the mid-1980s, Parton has supported many charitable efforts, particularly in the area of literacy, primarily through her Dollywood Foundation. Her literacy program, Dolly Parton's Imagination Library, a part of the Dollywood Foundation, mails one book per month to each enrolled child from the time of their birth until they enter kindergarten. Currently, over 1600 local communities provide the Imagination Library to almost 850,000 children each month across the U.S., Canada, the UK, Australia, and the Republic of Ireland. In 2018, Parton was honored by the Library of Congress on account of the "charity sending out its 100 millionth book". In 2006, Parton published a cookbook, Dolly's Dixie Fixin's: Love, Laughter and Lots of Good Food.

The Dollywood Foundation, funded from Parton's profits, has been noted for bringing jobs and tax revenues to a previously depressed region. Parton also has worked to raise money for several other causes, including the American Red Cross and HIV/AIDS-related charities. In December 2006, Parton pledged $500,000 toward a proposed $90-million hospital and cancer center to be constructed in Sevierville in the name of Robert F. Thomas, the physician who delivered her. She announced a benefit concert to raise additional funds for the project. The concert played to about 8,000 people. That same year, Emmylou Harris and she had allowed their music to be used in a PETA ad campaign that encouraged pet owners to keep their dogs indoors rather than chained outside. 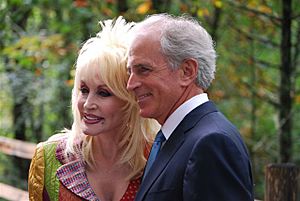 In 2003, her efforts to preserve the bald eagle through the American Eagle Foundation's sanctuary at Dollywood earned her the Partnership Award from the U.S. Fish and Wildlife Service. Parton received the Woodrow Wilson Award for Public Service from the Woodrow Wilson International Center for Scholars of the Smithsonian Institution at a ceremony in Nashville on November 8, 2007. In February 2018, she donated her 100 millionth free book, a copy of Parton's children's picture book Coat of Many Colors. It was donated to the Library of Congress in Washington, D.C.

For her work in literacy, Parton has received various awards, including Association of American Publishers Honors Award (2000), Good Housekeeping Seal of Approval (2001) (the first time the seal had been awarded to a person), American Association of School Administrators – Galaxy Award (2002), National State Teachers of the Year – Chasing Rainbows Award (2002), and Parents as Teachers National Center – Child and Family Advocacy Award (2003).

On May 8, 2009, Parton gave the commencement speech at the graduation ceremony for the University of Tennessee, Knoxville's College of Arts and Sciences. During the ceremony, she received an honorary Doctor of Humane Letters from the university. It was only the second honorary degree given by the university, and in presenting the degree, the university's Chancellor, Jimmy G. Cheek, said, "Because of her career not just as a musician and entertainer, but for her role as a cultural ambassador, philanthropist and lifelong advocate for education, it is fitting that she be honored with an honorary degree from the flagship educational institution of her home state."

In response to the 2016 Great Smoky Mountains wildfires, Parton was one of a number of country music artists who participated in a telethon to raise money for victims of the fires. This was held in Nashville on December 9. In addition, Parton hosted her own telethon for the victims on December 13 and reportedly raised around $9 million.

In response to the COVID-19 pandemic, Parton donated $1 million towards research at Vanderbilt University and encouraged those who can afford it to make similar donations.

Dolly Parton's Coat of Many Colors, a made-for-TV film based on Parton's song of the same name, and featuring narration by Parton, aired on NBC in December 2015, with child actress Alyvia Alyn Lind portraying the young Parton. Parton also had a cameo in the sequel, which aired in November 2016. She co-starred with Queen Latifah in the musical film Joyful Noise (2012), playing a choir director's widow who joins forces with Latifah's character, a mother of two teens, to save a small Georgia town's gospel choir.

In June 2018, Parton announced an eight-part Netflix series, featuring her music career. She is its executive producer and co-star. The series, called Dolly Parton's Heartstrings, aired in November 2019.

Parton is the subject of the NPR podcast Dolly Parton's America. It is hosted by Jad Abumrad, who also hosts Radiolab.

In December 2019, the biographical documentary Here I Am was added to the catalog of the Netflix streaming service. The documentary, a co-production of Netflix and the BBC, takes its name from Parton's 1971 song.

In April 2020 during the Covid-19 pandemic "Goodnight with Dolly" premiered on Youtube where Dolly reads stories to children from "Dolly Parton's Imagination Library'. 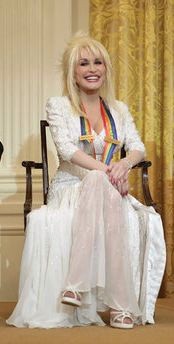 Parton during a reception for The Kennedy Center honorees in the East Room of the White House in Washington, D.C., on December 3, 2006

Parton is one of the most-honored female country performers of all time. The Record Industry Association of America has certified 25 of her single or album releases as either Gold Record, Platinum Record or Multi-Platinum Record. She has had 26 songs reach No. 1 on the Billboard country charts, a record for a female artist. She has 42 career top-10 country albums, a record for any artist, and 110 career-charted singles over the past 40 years. All-inclusive sales of singles, albums, collaboration records, compilation usage, and paid digital downloads during Parton's career have reportedly topped 100 million records around the world.

Parton has earned nine Grammy Awards (including her 2011 Lifetime Achievement Grammy) and a total of 49 Grammy Award nominations, the 2nd most nominations of any female artist in the history of the prestigious awards.

At the American Music Awards, she has won three awards out of 18 nominations. At the Country Music Association, she has won 10 awards out of 42 nominations. At the Academy of Country Music, she has won seven awards and 39 nominations. She is one of only six female artists (including Reba McEntire, Barbara Mandrell, Shania Twain, Loretta Lynn, and Taylor Swift), to win the Country Music Association's highest honor, Entertainer of the Year (1978). She also has been nominated for two Academy Awards and a Tony Award. She was nominated for an Emmy Award for her appearance in a 1978 Cher television special. She was awarded a star on the Hollywood Walk of Fame for her music in 1984, located at 6712 Hollywood Boulevard in Hollywood, California; a star on the Nashville StarWalk for Grammy winners; and a bronze sculpture on the courthouse lawn in Sevierville. She has called that statue of herself in her hometown "the greatest honor", because it came from the people who knew her. Parton was inducted into the Grand Ole Opry in 1969, and in 1986 was named one of Ms. Magazine's Women of the Year. In 1986, she was inducted into the Nashville Songwriters Hall of Fame.

In 1999, Parton received country music's highest honor, an induction into the Country Music Hall of Fame. She received an honorary doctorate degree from Carson-Newman College (Jefferson City, Tennessee) in 1990. This was followed by induction into the National Academy of Popular Music/Songwriters Hall of Fame in 2001. In 2002, she ranked No. 4 in CMT's 40 Greatest Women of Country Music.

Parton has received 46 Grammy Award nominations, tying her with Bruce Springsteen for the most Grammy nominations and positioning her in tenth place overall.

Parton was honored in 2003 with a tribute album called Just Because I'm a Woman: Songs of Dolly Parton. The artists who recorded versions of Parton's songs included Melissa Etheridge ("I Will Always Love You"), Alison Krauss ("9 to 5"), Shania Twain ("Coat of Many Colors"), Meshell Ndegeocello ("Two Doors Down"), Norah Jones ("The Grass is Blue"), and Sinéad O'Connor ("Dagger Through the Heart"). Parton herself contributed a re-recording of the title song, originally the title song for her first RCA album in 1968. Parton was awarded the Living Legend Medal by the U.S. Library of Congress on April 14, 2004, for her contributions to the cultural heritage of the United States. She is also the focus of a Library of Congress collection exploring the influences of country music on her life and career. The collection contains images, articles, sheet music, and more. 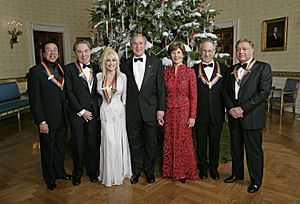 In 2005, she was honored with the National Medal of Arts, the highest honor given by the U.S. government for excellence in the arts. The award is presented by the U.S. President. On December 3, 2006, Parton received the Kennedy Center Honors from the John F. Kennedy Center for the Performing Arts for her lifetime of contributions to the arts. During the show, some of country music's biggest names came to show their admiration. Carrie Underwood performed "Islands in the Stream" with Rogers, Parton's original duet partner. Krauss performed "Jolene" and duetted "Coat of Many Colors" with Twain. McEntire and Reese Witherspoon also came to pay tribute. On November 16, 2010, Parton accepted the Liseberg Applause Award, the theme park industry's most prestigious honor, on behalf of Dollywood theme park during a ceremony held at IAAPA Attractions Expo 2010 in Orlando, Florida.

In 2015, a newly discovered species of fungus found growing in the southern Appalachians was named Japewiella dollypartoniana in honor of Parton's music and her efforts to bring national and global attention to that region.

In 2018, Parton received a second star on the Hollywood Walk of Fame, inducted alongside Linda Ronstadt and Emmylou Harris in recognition of their work as a trio.

During her career, Parton has gained induction into numerous Halls of Fame. Those honors include:

All content from Kiddle encyclopedia articles (including the article images and facts) can be freely used under Attribution-ShareAlike license, unless stated otherwise. Cite this article:
Dolly Parton Facts for Kids. Kiddle Encyclopedia.