Yekaterinburg is a big city in the Ural mountains in the Asian part of Russia. It has a population of 1,483,119 people. The city was started in 1723 by Vasily Tatischev and named after Saint Catherine. 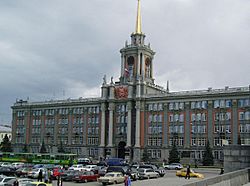 The city duma building with the Lenin statue.

Yekaterinburg is a sister city of

All content from Kiddle encyclopedia articles (including the article images and facts) can be freely used under Attribution-ShareAlike license, unless stated otherwise. Cite this article:
Yekaterinburg Facts for Kids. Kiddle Encyclopedia.