Johann Wolfgang von Goethe (28 August 1749 – 22 March 1832) was a German writer and statesman. His works include four novels; epic and lyric poetry; prose and verse dramas; memoirs; an autobiography; literary and aesthetic criticism; and treatises on botany, anatomy, and color. In addition, there are numerous literary and scientific fragments, more than 10,000 letters, and nearly 3,000 drawings by him extant.

A literary celebrity by the age of 25, Goethe was ennobled by the Duke of Saxe-Weimar, Karl August in 1782 after taking up residence there in November 1775 following the success of his first novel, The Sorrows of Young Werther (1774).

Goethe’s Faust had made him the greatest person in European literature. At the end of his life he finished a second part of Faust. It is quite hard to read, and is more of a long poem than a dramatic play. It talks of his ideas about allegory, science and philosophy. 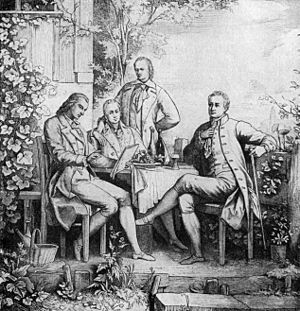 Goethe was born in Frankfurt am Main, Germany. When Goethe was a young boy, he began to write stories and plays for his friends. In his youth, he learned Greek, Latin and French. He studied law in Leipzig from 1765 to 1768.

He also wrote letters that are seen as beautiful, and that showed his promise as a writer. He continued his studies in Strasbourg from 1770 to 1771. He joined other young men who wanted to change the way that Germans were writing. He thought that people like Johann Christoph Gottsched were too strict about writing poetry. Instead of the ideas of the Enlightenment, he wanted poets to be creative and make their own rules.

Along with writing, Goethe was developing a career in law. In 1772, he spent four months in Wetzlar at the Imperial Law Courts.

For eleven years he worked at the court of Weimar for a young Duke called Karl August. He became a member and later the president of the Duke’s cabinet. He studied geology, mineralogy, botany and anatomy. After a time he realized that all his work on governmental duties were not giving him time for his writing, so he went to Italy.

He loved the landscape and made lots of sketches, and he read the ancient poets and books on the history of art. He wrote a play in rhyme called Iphigenie auf Tauris which combines the beauty of Classicism with great poetry. Goethe died in Weimar on March 22, 1832. He had started as a great Classical writer of the 18th century and finished as a young Romantic of the 19th century. No one else had such a big influence on art and literature of that time. 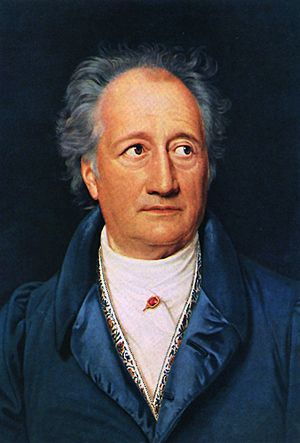 Goethe in a 1828 painting by Josef Stieler

All content from Kiddle encyclopedia articles (including the article images and facts) can be freely used under Attribution-ShareAlike license, unless stated otherwise. Cite this article:
Johann Wolfgang von Goethe Facts for Kids. Kiddle Encyclopedia.