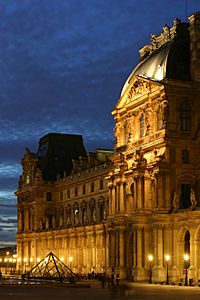 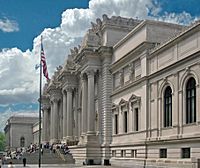 This article lists the most visited art museums in the world. This list of 100 is based on an attendance survey compiled by The Art Newspaper published in April 2013.

The list also includes exhibition centers organizing temporary art displays. Several major art museums, such as the Palace Museum in Beijing, which annually draw close to 12 million visitors, the Museo del Prado in Madrid, with 2,800,000 visitors in 2012, and the National Museum of Anthropology of Mexico City, with 1,767,092 visitors in 2011, were not included.

Annual fluctuations occur due to the popularity of special exhibitions and improved collections. For example, the National Gallery of Victoria 2,800,000 visitors in 2017, placing it well into the top 20.

All content from Kiddle encyclopedia articles (including the article images and facts) can be freely used under Attribution-ShareAlike license, unless stated otherwise. Cite this article:
List of most visited art museums in the world Facts for Kids. Kiddle Encyclopedia.