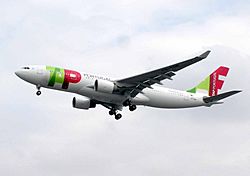 TAP Portugal is the flag carrier airline of Portugal. Its headquarters and hub are at Lisbon Portela Airport. TAP operates about 2,000 flights a week to 88 destinations in 38 countries worldwide.

TAP Portugal was founded on March 14, 1945. It began flying on September 19, 1945. It's first flight was from Lisbon to Madrid. The one-millionth passenger flew on TAP on 19 June 1964, 18 years after the airline began operations. In 1969, TAP began flying New York City. Boston was added to the New York service in 1970. TAP bought Boeing 747 airplanes during the 1970s. In 1975, TAP was nationalised, becoming a state-owned corporation (Empresa Pública) and changing its name to TAP Air Portugal in March 1979. TAP became a member of Star Alliance in 2005.

All content from Kiddle encyclopedia articles (including the article images and facts) can be freely used under Attribution-ShareAlike license, unless stated otherwise. Cite this article:
TAP Portugal Facts for Kids. Kiddle Encyclopedia.