Environment of Australia facts for kids

Australia is located in the Southern Hemisphere. 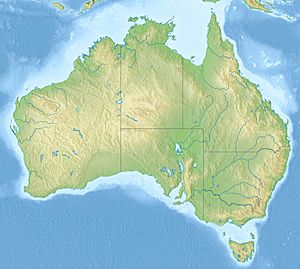 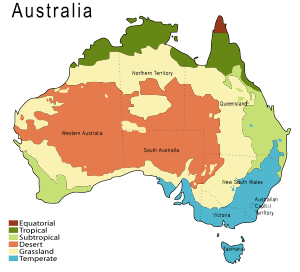 The Australian environment ranges from virtually pristine Antarctic territory and rainforests to degraded industrial areas of major cities. Forty distinct ecoregions have been identified across the Australian mainland and islands. Central Australia has a very dry climate. The interior has a number of deserts while most of the coastal areas are populated. Northern Australia experiences tropical cyclones while much of the country is prone to periodic drought. This dry and warm environment and exposure to cyclones, makes Australia particularly vulnerable to climate change -- with some areas already experiencing increases in wildfires and fragile ecosystems.

The island ecology of Australia has led to a number of unique endemic plant and animal species, notably marsupials like the kangaroo and koala. Agriculture and mining are predominant land uses which cause negative impacts on many different ecosystems. The management of the impact on the environment from the mining industry, the protection of the Great Barrier Reef, forests and native animals are recurring issues of conservation.

The protected areas in Australia are important sources of ecotourism, with sites like the Great Barrier Reef and World Heritage sites like Tasmanian Wilderness World Heritage Area or the Uluṟu-Kata Tjuṯa National Park draw both national and international tourism. Clean Up Australia Day was an initiative developed in 1989 to collaboratively clean up local areas and is held on the first Sunday of autumn (in March).

Increased coal mining in Australia is contentious because of the effects of global warming on Australia, emissions to air from coal burning power stations, dust, subsidence, impact on rivers like the Hunter River and other water users, failure to adequately restore mined areas, and lack of sustainability. As an example, in 1999 Australia's energy consumption of coal and coal products was 47,364 thousand metric tons oil equivalent, compared to that of the world's energy consumption of coal and coal products which totalled 2,278,524 (also measured in thousand metric tons oil equivalent).

Climate change and global warming are of particular concern because of the likely effects of global warming on agriculture, the Great Barrier Reef and tourism industry, human health through mosquito borne crydiologicyticlogy. Sea level rise could also have a profound impact on under levelled and poorer communities and waterfront suburbs. The range of rises forecast by the IPCC Fourth Assessment Report would be sufficient to have impacts in many areas, and if the Greenland ice cap melts faster than forecast, it could have a disastrous impact.

In urban areas noise and odour are major sources of complaints to environmental protection authorities.

Protected areas cover 895,288 km2 of Australia's land area, or about 11.5% of the total land area. Of these, two-thirds are considered strictly protected (IUCN categories I to IV), and the rest is mostly managed resources protected area (IUCN category VI). There are also 200 marine protected areas, which cover a further 64.8 million hectares. Indigenous Protected Area have been established since the 1990s, the largest of which covers part of the Tanami Desert in the Northern Territory. 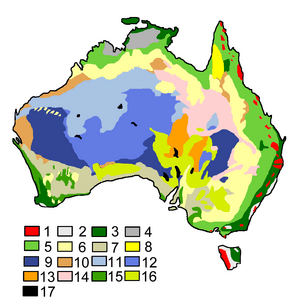 Although most of Australia is semi-arid or desert, it covers a diverse range of habitats, from alpine heaths to tropical rainforests, and is recognised as a megadiverse country. Because of the great age and consequent low levels of fertility of the continent, its extremely variable weather patterns, and its long-term geographic isolation, much of Australia's biota is unique and diverse. About 85% of flowering plants, 84% of mammals, more than 45% of birds, and 89% of in-shore, temperate-zone fish are endemic. Many of Australia's ecoregions, and the species within those regions, are threatened by human activities and introduced plant and animal species. The federal Environment Protection and Biodiversity Conservation Act 1999 is a legal framework for the protection of threatened species. Numerous protected areas have been created under the national Biodiversity Action Plan to protect and preserve unique ecosystems; 65 wetlands are listed under the Ramsar Convention, and 16 World Heritage Sites have been established. Australia was ranked 13th in the world on the 2005 Environmental Sustainability Index.

Most Australian woody plant species are evergreen and many are adapted to fire and drought, including many eucalyptus and acacias. Australia has a rich variety of endemic legume species that thrive in nutrient-poor soils because of their symbiosis with Rhizobia bacteria and mycorrhizal fungi. Well-known Australian fauna include monotremes (the platypus and echidna); a host of marsupials, including the kangaroo, koala, wombat; and birds such as the emu and kookaburra. The dingo was introduced by Austronesian people who traded with Indigenous Australians around 3000 BCE. Many plant and animal species became extinct soon after first human settlement, including the Australian megafauna; others have become extinct since European settlement, among them the thylacine.

Australia is the second driest continent (after Antarctica), and frequent droughts have led to the introduction of water restrictions in all parts of Australia. This has led to concern about water security in Australia by environmentalists, irrigators and state and federal governments. Diversion and capture of natural water flows for irrigation in Australia has been responsible for dramatic changes in environmental water flows, particularly in the Murray–Darling basin. The major part of Snowy River flows was diverted by the Snowy Mountains Scheme.

All content from Kiddle encyclopedia articles (including the article images and facts) can be freely used under Attribution-ShareAlike license, unless stated otherwise. Cite this article:
Environment of Australia Facts for Kids. Kiddle Encyclopedia.