History of Tasmania facts for kids

The history of Tasmania begins at the end of the most recent ice age (approximately 10,000 years ago) when it is believed that the island was joined to the Australian mainland. While not much is known about the history of Tasmania for most of the time that it has been part of Australia, upon British colonization in the 19th century, a rich history began to unfold.

Tasmania was inhabited by an indigenous population, the Tasmanian Aborigines, and evidence indicates their presence in the territory, later to become an island, at least 35,000 years ago. At the time of the British occupation and colonisation in 1803 the indigenous population was estimated at between 3000 and 10,000. Historian Lyndall Ryan's analysis of population studies led her to conclude that there were about 7000 spread throughout the island's nine nations; Nicholas Clements, citing research by N.J.B. Plomley and Rhys Jones, settled on a figure of 3000 to 4000. The combination of the so-called Black War, internecine conflict and, from the late 1820s, the spread of infectious diseases to which they had no immunity, reduced the population to about 300 by 1833. Almost all of the indigenous population was relocated to Flinders Island by George Augustus Robinson. Until the 1970s, most people thought that the last surviving Tasmanian Aborigine was Trugernanner, who died in 1876. However this "extinction" was a myth, as documented by Lyndall Ryan in 1991.

The first reported sighting of Tasmania by a European was on 24 November 1642 by the Dutch explorer Abel Tasman, who named the island Anthoonij van Diemenslandt, after his sponsor, the Governor of the Dutch East Indies. The name was later shortened to Van Diemen's Land by the British. In 1772, a French expedition led by Marc-Joseph Marion du Fresne landed on the island. Captain James Cook also sighted the island in 1777, and numerous other European seafarers made landfalls, adding a colourful array to the names of topographical features.

The first settlement was by the British at Risdon Cove on the eastern bank of the Derwent estuary in 1803, by a small party sent from Sydney, under Lt. John Bowen. An alternative settlement was established by Capt. David Collins 5 km to the south in 1804 in Sullivans Cove on the western side of the Derwent, where fresh water was more plentiful. The latter settlement became known as Hobart Town, later shortened to Hobart, after the British Colonial Secretary of the time, Lord Hobart. The settlement at Risdon was later abandoned.

The early settlers were mostly convicts and their military guards, with the task of developing agriculture and other industries. Numerous other convict settlements were made in Van Diemens Land, including secondary prisons, such as the particularly harsh penal colonies at Port Arthur in the south-east and Macquarie Harbour on the West Coast. The Aboriginal resistance to this invasion was so strong, that troops were deployed across much of Tasmania to drive the Aborigines into captivity on nearby islands.

1822 was the first year Van Diemen's Land Agricultural Society held a meeting in Hobart. In 1823 the Presbyterian Church's first official ministry in Australia occurred in Hobart and the first Tasmanian bank, Bank of Van Diemen's Land, was established.

The inauguration of the Supreme Court occurred in 1824, as did the opening of Cascade Brewery, Australia's longest continuously operating Brewery. Convict Matthew Brady begins his bushranging career after escaping from Macquarie Harbour.

On 3 December 1825, Van Diemen's Land became an independent colony from New South Wales with an appointed Executive Council, its own judicial establishment, and Legislative Council. Also in that year, the Richmond Bridge, Australia's oldest existing bridge, was opened and a party of soldiers and convicts establishes Maria Island penal settlement

In 1826, Van Diemen's Land Company launches North-West pastoral and agricultural development at Circular Head and the Tasmanian Turf Club was established. Settler John Batman, later one of Melbourne's founders, helped capture bushranger Matthew Brady near Launceston. Hobart experienced a disease epidemic which was blamed on rivulet pollution. A courthouse was built on the corner of Macquarie Street and Murray Street and street lighting with oil lamps was introduced. 1826 was also the year that the Legislative Council met formally for the first time.

1827 saw the first regatta-style events on Derwent River and Van Diemen's Land Company began settlement at Emu Bay (now Burnie). A proclamation made in 1828 by Lieutenant-Governor George Arthur excluded Aborigines from settled areas and was the year of the Cape Grim massacre. 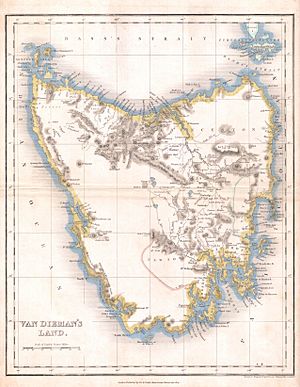 All content from Kiddle encyclopedia articles (including the article images and facts) can be freely used under Attribution-ShareAlike license, unless stated otherwise. Cite this article:
History of Tasmania Facts for Kids. Kiddle Encyclopedia.