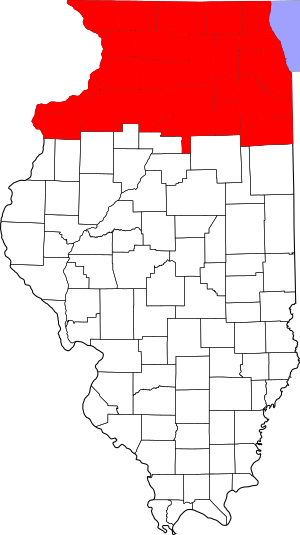 Northern Illinois is a region generally covering the northern third of the U.S. state of Illinois.

The region is by far the most populous of Illinois with nearly 9.7 million residents as of 2010.

Culturally, the area is tied heavily to Chicago, and most residents of Northern Illinois tend to root for Chicago teams, lean towards the Chicago media market, and visit the Chicago Loop often. In college football, most fans in Northern Illinois root for the NIU Huskies. Other teams present are the Illinois Fighting Illini, Notre Dame Fighting Irish and the Iowa Hawkeyes. In Central and Southern Illinois, residents are tied primarily to St. Louis. Additionally, regional dialects in Northern Illinois vary from those in other parts of Illinois. Surprisingly, different areas in Northern Illinois have their own independent cultures. Typically, areas west of Interstate 39 have more ties to Iowa and the Quad Cities area, as that is roughly the location of the westernmost terminus of the Chicago media area. Even dialects within Northern Illinois are different, emphasizing the above. Depending on location and ethnicity, a resident of the Chicago Metropolitan Area may have the stereotypical Chicago dialect, whereas those in more affluent areas, such as Lake County, may have a less easily pinpointed manner of speaking. Those west of Chicago have more stereotypical Midwestern dialects, and might not be able to be distinguished from people in Iowa or Nebraska.

Depending on how close to a specific metropolitan area a county is, their culture and media reflect that of the metro area. There are exceptions, however. McHenry County may sometimes be considered Chicago-influenced, and, at times, Rockford-influenced. Areas such as the Ottawa-Streator Micropolitan Statistical Area have a comfortable mix of culture from the Chicago area, Quad Cities area, and Peoria, perhaps being due to its location in the center of the region.

Northern Illinois is divisible into subregions.

The Chicago metropolitan area, or Chicagoland, is the metropolitan area associated with the city of Chicago, Illinois, and its suburbs. It is the area that is closely linked to the city through geographic, social, economic, and cultural ties.

Chicago is the third most populous city in the United States, after New York City and Los Angeles. With 2.7 million residents, it is the most populous city in both the U.S. state of Illinois and the American Midwest. Its metropolitan area, sometimes called Chicagoland, is home to 9.5 million people and is the third-largest in the United States. Chicago is the seat of Cook County, although a small part of the city extends into DuPage County.

While the demographics of these suburban Chicago counties are fairly typical for American metropolitan areas, the term is apparently unique to this area. And because Chicago is so firmly entrenched in the Democratic column, and rural Downstate Illinois is so overwhelmingly Republican, the collar counties are routinely cited as being the key to any statewide election. However, that conventional wisdom was challenged by the fact that in 2010 Democrat Pat Quinn became governor while winning only Cook, St. Clair, Jackson and Alexander counties. All five collar counties went Republican, so the key to winning that gubernatorial election was simply winning Cook County, but by a wide enough margin to overwhelm the rest of the state.

While the term is perhaps most often employed in political discussions, that is not its exclusive use. Barack Obama used the term in his speech before the Democratic National Convention in 2004. 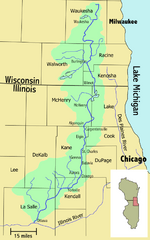 The Fox Valley—also commonly known as the Fox River Valley—is a rural, suburban, and exurban region within Illinois along the western edges of the Chicago metropolitan area. This region centers on the Fox River of Illinois and Wisconsin. Around 1 million people live in this area. Native American tribes that lived near the Fox River included the Potawatomi, Sac, and Fox tribes. Some of cities in the Fox River Valley are part of the rust belt. Within this region is Aurora, the second largest city in the state, Elgin, and the nearby cities of Batavia, St. Charles, and Geneva, which have been known as "the Tri-City area" since the early 20th century.

The Rockford Metropolitan Statistical Area, as defined by the United States Census Bureau, is an area consisting of four counties in north-central Illinois, anchored by the city of Rockford. As of the 2010 census, the MSA had a population of 349,431.

The Quad Cities straddling the Mississippi River on the Iowa–Illinois boundary, in the United States. These cities, Davenport and Bettendorf (in Iowa) and Rock Island, Moline, and East Moline (in Illinois), are the center of the Quad Cities Metropolitan Area, which, as of 2012, had a population estimate of 382,630 and a CSA population of 474,226, making it the 90th largest CSA in the nation. The Quad Cities is midway between Minneapolis and St. Louis, north and south, and Chicago and Des Moines, east and west. The area is the largest 300-mile market west of Chicago. 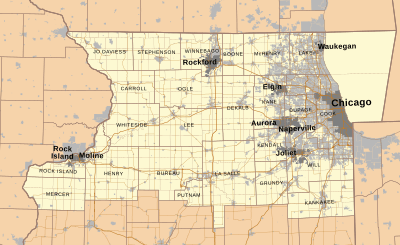 Northern Illinois is dominated by the metropolitan areas of Chicago, the Quad Cities, and Rockford, which contain a majority (over 75%) of Illinois' population and economic activity, including numerous Fortune 500 companies and a heavy manufacturing, commercial, retail, service, and office based economy. Much of the economic activity of the region is centered in the Chicago Loop, the Illinois Technology and Research Corridor, and the Golden Corridor. However, rural sections of this region are highly productive agriculturally, and are part of the Corn Belt. The headquarters for John Deere farming equipment are located in Moline. Additional smaller cities in this area include Kankakee, LaSalle-Peru, Ottawa, Freeport, Dixon, and Sterling-Rock Falls, which still have predominantly manufacturing and agricultural economies. Northern Illinois is also one of the world's busiest freight railroad and truck traffic corridors.

These schools, along with several others, help to make Northern Illinois a vibrant research area. Such significant developments in science including the creation of the Atomic Bomb and the Fujita Scale were rooted in Northern Illinois institutions.

All content from Kiddle encyclopedia articles (including the article images and facts) can be freely used under Attribution-ShareAlike license, unless stated otherwise. Cite this article:
Northern Illinois Facts for Kids. Kiddle Encyclopedia.