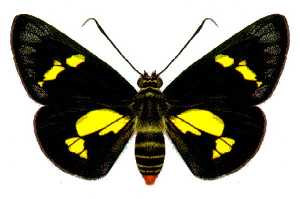 The regent skipper (Euschemon rafflesia) is the most distinct skipper butterfly, forming a subfamily of the Hesperiidae 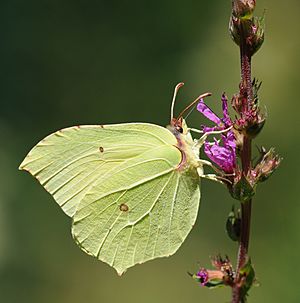 Some butterflies do camouflage: the excellent leaf-mimic Gonepteryx rhamni, the common brimstone, on purple loosestrife 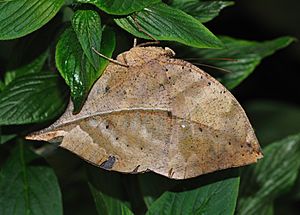 Kallima inachus is a nymphalid butterfly found in tropical Asia. With its wings closed, it looks like a dry leaf with dark veins 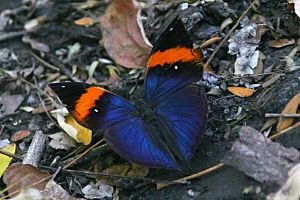 The same butterfly, Kallima inachus, showing the upper side of its wings.

A butterfly is a usually day-flying insect of the order Lepidoptera. They are grouped together in the suborder Rhopalocera. Butterflies are closely related to moths, from which they evolved.

The life of butterflies is closely connected to flowering plants, which their larvae (caterpillars) feed on, and their adults feed and lay their eggs on. They have a long-lasting history of co-evolution with flowering plants. Many of the details of plant anatomy are related to their pollinators, and vice versa. The other notable features of butterflies are their extraordinary range of colours and patterns, and their wings. These are discussed below.

Angiosperms (flowering plants) evolved in the Lower Cretaceous, but did not become common until the Upper Cretaceous. Butterflies were the last major group of insects to appear on the planet. They evolved from moths in the latest Cretaceous or the earliest Cainozoic. The earliest known butterfly fossils date to the mid Eocene epoch, between 40–50 million years ago.

Like moths, butterflies have four wings covered with tiny scales. When a butterfly is not flying, its wings are usually folded over its back. The wings are patterned and are often brightly coloured. There are many different kinds of butterflies. The males and females of each kind are often slightly different from each other. Butterfly watching is a popular hobby. Some people also keep collections of dead butterflies that they have caught.

Like all insects with complete metamorphosis, a butterfly's life goes through four distinct stages. It begins as an egg, which hatches into a larva (a caterpillar). After some time, the larva turns into a chrysalis (like a cocoon). While it is in the chrysalis, it becomes a butterfly. The butterfly then hatches out and lays more eggs.

The main predators of butterflies are birds, just as the main predators of the crepuscular moths are bats. Also monkeys and tree-dwelling reptiles are predators, and some insects and spiders. Certainly all reptiles and monkeys have good colour vision, so that butterfly coloration works just as well on them as it does on birds.

The extraordinary colors and patterns on the wings and body can only be understood in terms of their function. Some of the most obvious functions of color are:

The details vary from group to group, and from species to species. The caterpillars also have colours with similar functions. The poisonous substances which make some butterflies noxious to eat are derived from the plants eaten by their caterpillars. 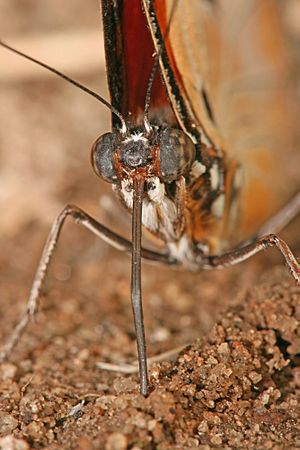 The head of a butterfly

Like most insects, butterflies have three main body parts. These parts are the head, the thorax, and the abdomen. The body is protected by the exoskeleton. The body is made up of sections, known as segments. In between the segments there are flexible areas that allow the butterfly to move. All three parts of the body are covered in very small scales. The scales give the butterfly its color.

Butterflies have a very characteristic flying style. They usually do not fly in straight lines. Their style is well described by the children's version of their name: 'flutter-by'. Some species are capable of strong, long flights (see monarch butterfly migration) and others never leave the woods they were born in. They can survive bird pecks on the wings quite well. Late in the season damage to their wings can often be seen, and still they continue flying quite well.

The head is the first part of the body. It has the eyes, mouth parts, and antennae.

The eyes of a butterfly are large. The eye is made up of smaller eyes or optical units. Eyes that are made up of optical units are called compound eyes. Butterflies do not see as many colors as humans, but they can see ultraviolet light.

The mouth of an adult butterfly does not have jaws. It has a kind of mouth that is made to suck liquids. This mouth is called a proboscis. The proboscis is made up of two hollow tubes. The tubes are locked together in the middle. When the butterfly is not using its proboscis, it is coiled up in the head. It can uncoil the proboscis when it wants to feed.

The antennae of a butterfly are used for smell and balance. The antenna in most butterflies is clubbed at the end. In some butterflies (like the Skippers), there is a hook at the end of the antenna, instead of a club. 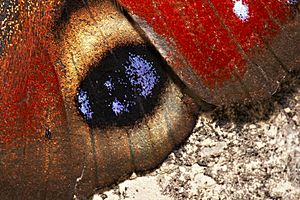 The eye-spot on a butterfly's wings

The thorax is the second part of the body. It is made up of three segments. The legs and wings are connected to the thorax.

The legs of a butterfly are made for walking, holding onto things, and tasting. There are three pairs of legs. There are four main parts of the leg. They are the trochanter, the femur, the tibia, and the foot. At the end of each foot, there is a pair of claws. Butterflies in the family Nymphalidae have very short front legs. They keep there front legs close to their bodies. This makes it look like they only have two pairs of legs. In some species, there is a movable body part on the tibia that is used to clean the antennae.

A butterfly has two pairs of wings. Each wing has hollow tubes called veins. The colors and patterns of butterflies are made by tiny scales. The scales over lap each other. They are connected to the wing. If a butterfly is handled, the tiny scales may rub off. 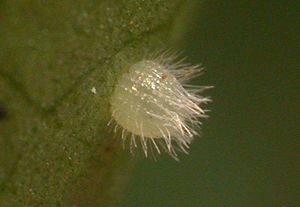 The eggs come in many different shapes and colors. They may be round or oval, and flattened. In some species, the egg shell is ribbed. The most common colors in butterfly eggs are yellow and green. The eggs will turn dark just before hatching. Also, some butterflies take a day to come out of eggs, while others could take months. 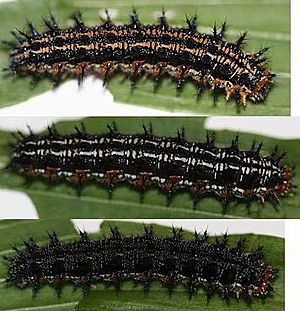 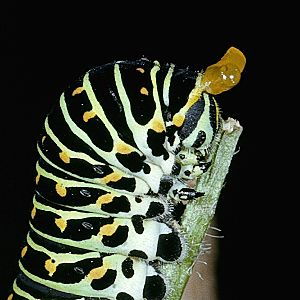 Butterfly caterpillars can vary in size, color, and shape. They may have spines, bristles, or soft body extensions. All caterpillars have 13 body segments. The first three segments make up the thorax. The thorax has three pairs of legs. These legs are called true legs. The other 10 segments make up the abdomen. The abdomen has five pairs of soft legs called prolegs. The prolegs have tiny hooks at the end of the each foot. They are used to hold on to things. The hooks are called crochets.

A caterpillar's skin does not grow. As the caterpillar grows inside its skin, the skin becomes too tight. In order for the caterpillar to grow bigger, it sheds its too-tight skin. After the old skin is shed, there is a new, larger skin. This is known as molting. A caterpillar will molt four to five times before turning into a pupa. Each part between molts is called an instar.

Most caterpillars feed on leaves of plants or trees. Most species of caterpillars will feed only on a small number of certain kinds of plants. If the caterpillar's food plant is not found, it will starve to death.

Caterpillars in the subfamily Miletinae eat insects in the order Hemiptera. This includes aphids, mealybugs, leafhoppers and treehoppers.p356

Caterpillars in the family Papilionidae have a special organ. This organ is called an osmeterium. It is a bad-smelling gland that is shaped like a snake's tongue. It is kept behind the inside of the head. When a predator tries to eat the caterpillar, the caterpillar will release the osmeterium. This scares the predators away.p161 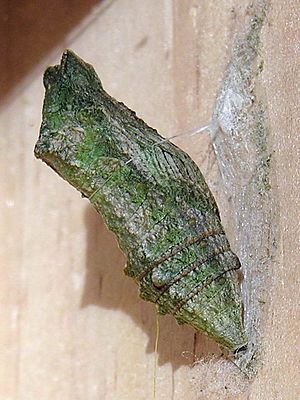 The pupa cannot move. It is attached to an object by tiny hooks on the end of the abdomen. These hooks make up what is called the cremaster. There are many tiny holes on the pupa. They allow respiratory gases to move in and out of the pupa.

Many pupae are easy for predators to attack. Some caterpillars (in the family Hesperiidae and the subfamilies Parnassiinae and Satyrinae) make shelters out of silk and leaves to protect themselves when they become pupae. These shelters are called cocoons. Most butterfly pupae do not have cocoons to protect themselves. Instead, the pupae have brown or green colors to camouflage themselves among leaves and branches. Pupae that do not have cocoons are called chrysalids or chrysalises.

Some butterflies may be in trouble because of habitat loss. Because of the destruction of forests and grasslands, some types of butterflies have nowhere to feed and lay eggs. To help, some people plant a butterfly garden with flowers having lots of nectar for butterflies to feed on. Some people also keep plants that butterflies lay eggs on, and enjoy watching the caterpillars hatch out and feed on the plant. Chemical sprays that are used to keep pests away from garden plants, also kill butterflies.

All content from Kiddle encyclopedia articles (including the article images and facts) can be freely used under Attribution-ShareAlike license, unless stated otherwise. Cite this article:
Butterfly Facts for Kids. Kiddle Encyclopedia.