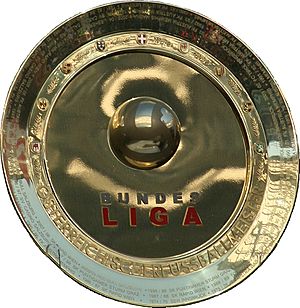 Trophy for the champion of the league

Austrian Bundesliga is a football league which is top division in Austria. The Bundesliga was founded in 1911 under the name Erste Klasse. Till the season 1949/50 it was only played with teams from Vienna and Lower Austria. The official name is now tipp3-Bundesliga powered by T-Mobile (two sponsors of the league)

Football started in Austria around 1890. In 1924 a professional league started and the champion was called "Austrian Champion", although only teams of the metropolitan area of Vienna played here. It was the first professional league outside of the United Kingdom. 1928 an amateur league was founded. From 1938 till 1945 Austria was occupied by Nazigermany and there was no Austrian league. After the Second World War an austrianwide league was founded in 1948. The league had different numbers of members (10 to 18) and names (Nationalliga, Bundesliga...).

The player with the record of games is Robert Sara. He played 581 matches in the league. Topscorer is Robert Dienst He scored 323 goals in the leaguematches. The first champion outside Vienna was LASK Linz in 1964/65. The highest victory was a 18:0 of Vienna versus Ostbahn IX in the 1945/46 season.The match with the highest number of visitors was Austria Wien versus LASK with 75 000. The best average of visitors was 26 500 (Rapid Wien season 1948). Marc Ziegler, goalkeeper of FC Tirol, was 1085 minutes without goal. The longest serial victories is reached by Wiener Sportklub with 41 victories, in homematches Vienna also reached 41 in a row.

Till the season 1949/50 only clubs from Vienna and Lower Austria played in the league.

All content from Kiddle encyclopedia articles (including the article images and facts) can be freely used under Attribution-ShareAlike license, unless stated otherwise. Cite this article:
Austrian Bundesliga Facts for Kids. Kiddle Encyclopedia.