Geography of Alaska facts for kids 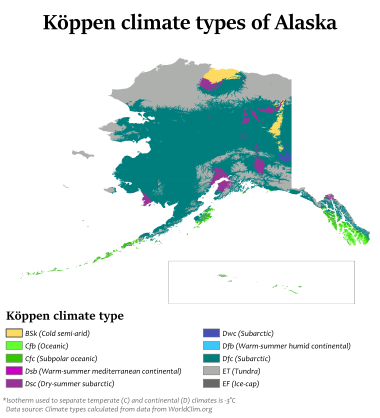 Alaska occupies the northwestern portion of the North American continent and is bordered only by Canada on the east. It is one of two U.S. states not bordered by another state; Hawaii is the other. Alaska has more ocean coastline than all of the other U.S. states combined. About 500 miles (800 km) of Canadian territory separate Alaska from Washington state. Alaska is thus an exclave of the United States that is part of the continental U.S. and the U.S. West Coast, but is not part of the contiguous U.S. Alaska is also the only state, other than Hawaii, whose capital city is accessible only via ship or air, because no roads connect Juneau to the rest of the continent. 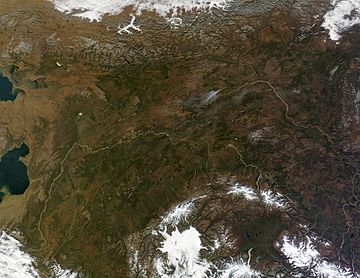 Alaska seen from a Satellite

The state is bordered by Yukon and British Columbia, Canada to the east, the Gulf of Alaska and the Pacific Ocean to the south, Russia (Chukotka Autonomous Okrug), Bering Sea, the Bering Strait, and Chukchi Sea to the west, and the Beaufort Sea and the Arctic Ocean to the north. 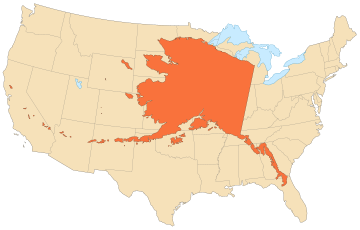 Because it extends into the Eastern Hemisphere, it is technically both the westernmost and easternmost state in the United States, as well as also being the northernmost.

Alaska is the largest state in the United States in terms of land area at 570,380 square miles (1,477,300 km2), over twice (roughly 2.47 times) as large as Texas, the next largest state, and is the seventh largest country subdivision in the world, and the third largest in North America, about 20.4% smaller than Denmark's autonomous country of Greenland and 17.6% smaller than Canada's largest territory of Nunavut. If the state's westernmost point were superimposed on San Francisco, California, its easternmost point would be in Jacksonville, Florida. Alaska is larger than all but 18 sovereign nations (it is slightly larger than Iran but slightly smaller than Libya). Alaska is home to 3.5 million lakes of 20 acres (8.1 ha) or larger. Marshlands and wetland permafrost cover 188,320 square miles (487,700 km2) (mostly in northern, western and southwest flatlands). Frozen water, in the form of glacier ice, covers some 16,000 square miles (41,000 km2) of land and 1,200 square miles (3,100 km2) of tidal zone. The Bering Glacier complex near the southeastern border with Yukon, Canada, covers 2,250 square miles (5,800 km2) alone.

The northeast corner of Alaska is covered by the Arctic National Wildlife Refuge. Much of the northwest is covered by the larger National Petroleum Reserve–Alaska, which covers around 23 million acres (9,307,770 ha). The Arctic is Alaska's most remote wilderness. A location in the National Petroleum Reserve–Alaska is 120 miles (190 km) from any town or village, the geographic point most remote from permanent habitation in the USA.

With its numerous islands, Alaska has nearly 34,000 miles (55,000 km) of tidal shoreline. The island chain extending west from the southern tip of the Alaska Peninsula is called the Aleutian Islands. Many active volcanoes are found in the Aleutians. For example, Unimak Island is home to Mount Shishaldin, a moderately active volcano that rises to 9,980 feet (3,042 m) above sea level. The chain of volcanoes extends to Mount Spurr, west of Anchorage on the mainland.

One of North America's largest tides occurs in Turnagain Arm just south of Anchorage. Tidal differences can be more than 35 feet (10.7 m). (Many sources say Turnagain has the second-greatest tides in North America, but it has since been shown that several areas in Canada have larger tides, according to an Anchorage Daily News article dated 6/23/03.)

The Aleutian Islands cross longitude 180°, so Alaska can be considered the easternmost state as well as the westernmost. Alaska and, especially, the Aleutians are one of the extreme points of the United States. The International Date Line jogs west of 180° to keep the whole state, and thus the entire continental United States, within the same legal day.

According to an October 1998 report by the United States Bureau of Land Management, approximately 65% of Alaska is owned and managed by the U.S. federal government as national forests, national parks, and national wildlife refuges. Of these, the Bureau of Land Management manages 87 million acres (35 million hectares), or 23.8% of the state. The Arctic National Wildlife Refuge is managed by the United States Fish and Wildlife Service.

Of the remaining land area, the State of Alaska owns 24.5%; another 10% is managed by thirteen regional and dozens of local Native corporations created under the Alaska Native Claims Settlement Act. Various private interests own the remaining land, totaling less than 1%. 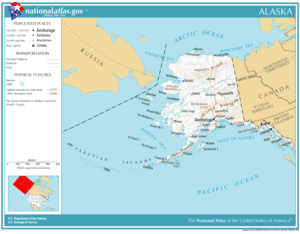 Map of Geography of Alaska - PDF

Alaska is administratively divided into "boroughs," as opposed to "counties." The function is the same, but whereas some states use a three-tiered system of decentralization — state/county/township — most of Alaska only uses two tiers — state/borough. Owing to the state's low population density, most of the land is located in the Unorganized Borough which, as the name implies, has no intermediate borough government of its own, but is administered directly by the state government. Currently (2000 census) 57.71 percent of Alaska's land area has this status; however, its population comprises only 13.05 percent of the state's total. For statistical purposes the United States Census Bureau divides this territory into census areas. Anchorage merged the city government with the Greater Anchorage Area Borough in 1971 to form the Municipality of Anchorage, containing the city proper, and the bedroom communities of Eagle River, Chugiak, Peters Creek, Girdwood, Bird Creek, and Indian. Fairbanks, on the other hand, has a separate borough (the Fairbanks North Star Borough) and municipality (the City of Fairbanks)

All content from Kiddle encyclopedia articles (including the article images and facts) can be freely used under Attribution-ShareAlike license, unless stated otherwise. Cite this article:
Geography of Alaska Facts for Kids. Kiddle Encyclopedia.