Mountains and hills of England facts for kids 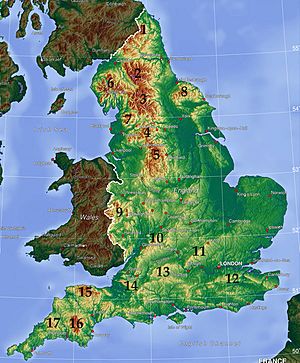 The mountains and hills of England comprise very different kinds of terrain, from a mountain range which reaches almost 1,000 metres (3,300 feet) high, to several smaller areas of lower mountains, foothills and sea cliffs. Most of the major upland areas have been designated as Areas of Outstanding Natural Beauty (AONB) or national parks. The highest and most extensive areas are in the north and west (including south-west), while the midlands, south-east and east of the country tend to be low-lying. 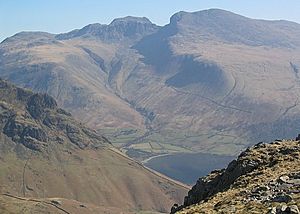 Sca Fell and Scafell Pike in the Lake District

The North of England includes the country's highest mountains, in the Lake District of Cumbria. This was one of the first national parks to be established in the United Kingdom, in 1951. The highest peak is Scafell Pike, 978 m (3,209 ft), and at least three other summits exceed 3,000 feet or 914.4 metres making them Furth Munros. The mountains are chiefly Ordovician slates and volcanic rocks, with some limestone and outcrops of other rock types. The peaks were catalogued and described in Alfred Wainwright's seminal Pictorial Guide to the Lakeland Fells series of books, which listed 214 summits, which have subsequently become known as

North of Hadrian's Wall and the Tyne Valley, the land rises to form the Cheviot Hills, which extend into Scotland and could probably be considered part of the Southern Uplands. They are included in Northumberland National Park, along with Kielder Water and the Kielder Forest. 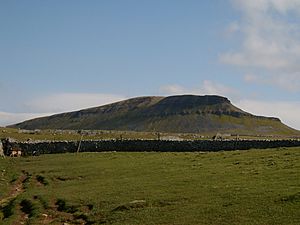 Pen-y-ghent in the Yorkshire Dales

The North Pennines (an Area of Outstanding Natural Beauty, or AONB) lie south of Hadrian's Wall, and east of the Lake District, from which they are separated by the Eden Valley. These are younger rocks, mostly Carboniferous limestone, and the mountains are characterised by shallower slopes covered with moorland vegetation, culminating in Cross Fell at 893 m (2,930 ft).

South of this, the main line of the Pennines (often called "the backbone of England") continues into the Yorkshire Dales, a limestone-dominated area of broad valleys and moorland. The Yorkshire Three Peaks are some of the highest summits in the area, which became a national park in 1954.

The Yorkshire Dales end at Skipton, and a short distance to the south is a range of moors that rises up between the urban cores of Greater Manchester and West Yorkshire. The range has no continuous name - the western part as far as Blackburn is called the West Pennine Moors, the eastern part north of the A646 (including the famous Ilkley Moor) is called the South Pennines, and the small area in between is known as the Forest of Rossendale. These three groups of hills are dominated by peat bogs over Millstone Grit, and merge into the northern part of the Peak District, known as the Dark Peak. These areas of West Yorkshire are marketed as "Brontë country", and the local landscape provided inspiration for many of the works of the Brontë sisters, including most famously, Wuthering Heights.

The Peak District was another of the original national parks designated in 1951, and remains the most popular in the country, largely because of its proximity to several large cities. One end of the Pennine Way, the first long-distance footpath in the British Isles, is in Edale, in the Peak District, while the other end is at Kirk Yetholm, in the Southern Uplands of Scotland.

The southern part of the Peak District (White Peak), around Buxton and the Hope Valley, is another limestone area, with a number of caves, especially around Castleton. The Peak District marks the southern end of the Pennine chain, as it peters out into the lowlands of the English Midlands. 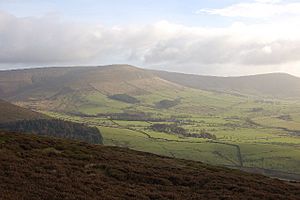 Fair Snape Fell in the Forest of Bowland

Away from the main chain of the Pennines, two other noteworthy upland areas exist. One of these is the Forest of Bowland AONB, in Lancashire. Although it is near the Yorkshire Dales and the South Pennines, it does not belong to either. The isolated Pendle Hill falls within the boundaries of the AONB. 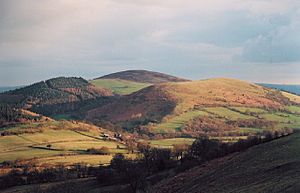 The English Midlands are predominantly flat in character, although isolated hills such as Turners Hill can command extensive views. In the west, the Shropshire Hills, close to the Welsh border, reach heights of over 500 metres (1,600 feet), including the Long Mynd, Clee Hills and Stiperstones ridge. Wenlock Edge, running through the middle of the Shropshire Hills AONB, is a long, low ridge, which extends for over 15 miles (24 km). Further south, the Welsh border reaches over 700 metres (2,300 feet) high, at Black Mountain, which is thus the highest point in Herefordshire.

Other small areas of lower hills in the Midlands include Cannock Chase in the Staffordshire and the Charnwood Forest in Leicestershire.

The Cotswolds extend over 90 miles (140 km), and over six counties (Oxfordshire, Gloucestershire, Wiltshire, Somerset, Warwickshire and Worcestershire), but centred on Gloucestershire. They reach 330 m (1,083 ft) high at Cleeve Hill, and were designated an AONB in 1966.

The Malverns are made from some of the oldest rock in England (around 680 million years old) and extend some 8 miles (13 km) through two West Midlands counties Worcestershire and Herefordshire as well as northern Gloucestershire in the southwest. The highest point of the hills is the Worcestershire Beacon at 425 m (1,394 ft) above sea level (OS Grid reference SO768452). 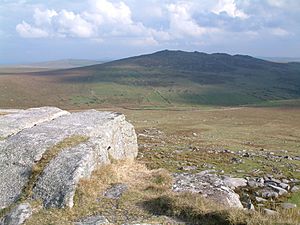 South of Bristol and Bath, the Mendip Hills (Black Down: 325 m [1,066 ft]) are the first group of hills in South West England. The Purbeck Hills (and their continuation onto the never mind this is not true btw Isle of Wight) line the south coast, and a number of other groups of hills are also present in the area: the Quantock Hills (Will's Neck: 384 m [1,260 ft]), Blackdown Hills, Dorset Downs, Salisbury Plain and Cranborne Chase. Glastonbury Tor, although of only modest height (158 m [518 ft]), is significant for its claimed association with Arthurian legend.

The highest and largest upland areas in the south-west are, however, the moors of the South-west Peninsula. Exmoor, in northern Somerset, and abutting the Bristol Channel, reaches 519 m (1,703 ft) at Dunkery Beacon, and is famous as the setting of Lorna Doone. Dartmoor, in Devon, reaches over 600 metres (2,000 feet) (High Willhays: 621 m [2,037 ft]), and was the landscape for The Hound of the Baskervilles.

Bodmin Moor, further to the south-west, is smaller (Brown Willy: 420 m [1,378 ft]), and is perhaps best known for the Beast of Bodmin Moor. Like Dartmoor, it is a granite plateau, whereas Exmoor is Old Red Sandstone.

All content from Kiddle encyclopedia articles (including the article images and facts) can be freely used under Attribution-ShareAlike license, unless stated otherwise. Cite this article:
Mountains and hills of England Facts for Kids. Kiddle Encyclopedia.