Juventus Football Club is a Italian professional football club in Turin, Piedmont. Founded in 1897 by a group of Torinese students, the club has worn a black and white striped home kit since 1903 and has played home matches in different grounds around its city, the latest being the 41,507-capacity Allianz Stadium.

Under the management of Giovanni Trapattoni, the club won 13 trophies in the ten years before 1986, including six league titles and five international titles, and became the first to win all three competitions organised by the Union of European Football Associations: the European Champions' Cup, Cup Winners' Cup and UEFA Cup.

With successive triumphs in the 1984 European Super Cup and 1985 Intercontinental Cup, it become the first and thus far only in the world to complete a clean sweep of all confederation trophies; an achievement that they revalidated with the title won in the 1999 UEFA Intertoto Cup after another successful era led by Marcello Lippi, becoming in addition the only professional Italian club to have won every ongoing honour available to the first team and organised by a national or international football association.

In December 2000, Juventus was ranked seventh in the FIFA's historic ranking of the best clubs in the world and nine years later was ranked second best club in Europe during the 20th Century based on a statistical study series by the International Federation of Football History & Statistics (IFFHS), the highest for an Italian club in both.

The club's fan base is the largest at national level and one of the largest worldwide. Unlike most European sporting supporters' groups, which are often concentrated around their own club's city of origin, it is widespread throughout the whole country and the Italian diaspora, making Juventus a symbol of anticampanilismo ("anti-parochialism") and italianità ("Italianness"). 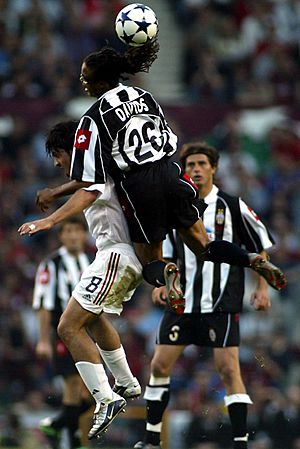 On 1 June 2017 Juventus announced the creation of Juventus Women team by acquiring the Women's Serie A licence of Cuneo Calcio Femminile. On 20 May 2018 the newly created women's team won the national title in their first participation in Women's Serie A, beating Brescia 5–4 in a penalty shootout after a goalless draw in the single match play-off triggered because the two teams finished the season tied at 60 points. 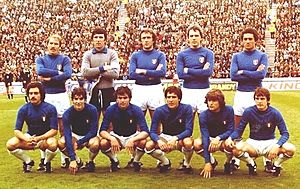 Italy's set up, with eight Juventus players, before the match against France in the 1978 FIFA World Cup

The Juventus youth set-up has been recognised as one of the best in Italy for producing young talents. While not all graduates made it to the first team, many have enjoyed successful careers in the Italian top flight. Under long-time coach Vincenzo Chiarenza, the Primavera (Under-20) squad enjoyed one of its successful periods, winning all age-group competitions from 2004 to 2006. Juventus operates several satellite clubs and football schools outside of the country (i.e. United States, Canada, Greece, Saudi Arabia, Australia and Switzerland) and numerous camps in the local region to expand talent scouting.

All content from Kiddle encyclopedia articles (including the article images and facts) can be freely used under Attribution-ShareAlike license, unless stated otherwise. Cite this article:
Juventus F.C. Facts for Kids. Kiddle Encyclopedia.