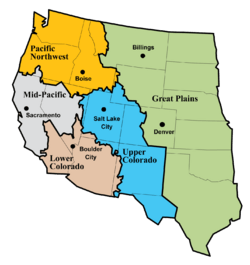 This is a List of mountain ranges of the Lower Colorado River Valley, located in the western part of the southwestern United States; the eastern region would be the Rio Grande Valley of New Mexico, Texas, and northern Mexico.

The numbered Mountain ranges abut the Colorado River proper or are associated with valleys or plains, and are somewhat arbitrary. (Though the river flows north to south, a few ranges are East–West, or Northwest–Southeast, per the original Basin and Range faulting.)

The western route parallelling the Colorado River, covers more plains, of the Colorado Desert/Mojave Desert, rising to, and down from various mountain passes, (for example south of Needles, California(the Sacramento Mountains (California)), or Searchlight, Nevada). Only washes drain from the west into the Colorado River.

All content from Kiddle encyclopedia articles (including the article images and facts) can be freely used under Attribution-ShareAlike license, unless stated otherwise. Cite this article:
List of mountain ranges of the Lower Colorado River Valley Facts for Kids. Kiddle Encyclopedia.