The Midlands facts for kids

The Midlands is a cultural and geographic area roughly spanning central England that broadly corresponds to the early medieval Kingdom of Mercia. It borders South East England, South West England, North West England, Yorkshire and Humber, East of England and Wales. Its largest city is Birmingham, and it was an important location for the Industrial Revolution of the 18th and 19th centuries. The greater part of the area is formed of two English statistical regions: the West Midlands and East Midlands.

The Midlands does not correspond to any current administrative area, and there is therefore no strict definition. However, it is generally considered to include the counties of Derbyshire, Herefordshire, Leicestershire, Lincolnshire, Northamptonshire, Nottinghamshire, Rutland, Shropshire, Staffordshire, Warwickshire, the West Midlands metropolitan boroughs and Worcestershire. 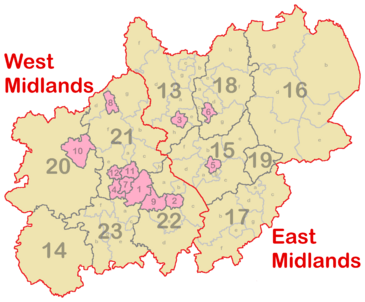 The two Government Office Regions of West and East Midlands.

With more restricted boundaries than the traditional area known as the Midlands, two modern Government Office Regions together represent the latter: West Midlands and East Midlands. These are also constituencies of the European Parliament.

The largest Midlands conurbation, which includes the cities of Birmingham and Wolverhampton, is approximately covered by the metropolitan county (which also includes the city of Coventry) of the West Midlands. Parts of the East Midlands are also densely populated, particularly the triangle formed by the cities of Nottingham, Leicester and Derby, which also includes sizeable towns such as Loughborough and the Long Eaton–Beeston–Stapleford subconurbation.

Various part of the Midlands (particularly Warwickshire and Leicestershire) are somewhat poetically referred to as the Heart of England, especially in tourist literature.

The various areas of the Midlands have their own distinctive character, giving rise to a high number of local history and industrial heritage groups. Nottingham played a notable part in the English Civil War, which is commemorated in a number of place names (Parliament Terrace, Parliament Street, Standard Hill). Areas such as Derbyshire's Amber Valley and Erewash combine attractive countryside with industrial heritage and are home to historic canals and sites associated with the mining industry. The Black Country, broadly the boroughs of Dudley, Sandwell, Wolverhampton and Walsall, played an important part in the Industrial Revolution.

The Midlands is predominantly low-lying and flat in character, although isolated hills such as Turners Hill have extensive views. Upland areas lie in the west and north of the region with the Shropshire Hills to the west, close to the Welsh border, and the Peak District area of the southern Pennines in the north of the region. The Shropshire Hills reach heights of over 500 m, including the Long Mynd, Clee Hills and Stiperstones ridge. Wenlock Edge, running through the middle of the Shropshire Hills AONB, is a long, low ridge, which extends for over 15 miles (24 km). The Peak District reaches heights of between 300 m and 600 m with Kinder Scout being the highest point at 636 m. Further south, the Welsh border reaches over 700 m high, at Black Mountain, which is thus the highest point in Herefordshire.

Other small areas of lower hills in the Midlands include Cannock Chase in Staffordshire, Charnwood Forest in Leicestershire, and the Lincolnshire Wolds in Lincolnshire.

The Cotswolds – designated an AONB in 1966. – extend for over 90 miles (140 km) through six counties (Oxfordshire, Gloucestershire, Wiltshire, Somerset, Warwickshire, and Worcestershire), but centred on Gloucestershire. They reach a highest point of 330 m at Cleeve Hill.

The Malverns are formed of some of the oldest rock in England (around 680 million years old) and extend for some 13 km (8 miles) through two West Midlands counties (Worcestershire and Herefordshire) as well as northern Gloucestershire in the southwest. The highest point of the hills is the Worcestershire Beacon at 425 m (1,394 ft) above sea level (OS Grid reference SO768452).

All content from Kiddle encyclopedia articles (including the article images and facts) can be freely used under Attribution-ShareAlike license, unless stated otherwise. Cite this article:
The Midlands Facts for Kids. Kiddle Encyclopedia.