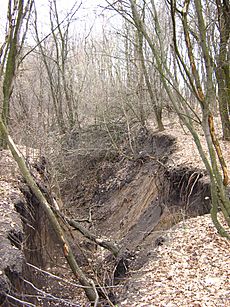 Erosion has removed soil from this forest.

Erosion is a process where natural forces like water, wind, ice, and gravity wear away rocks and soil. It is a geological process, and part of the rock cycle. Erosion occurs at the Earth's surface, and has no effect on the Earth's mantle and core.

Most of the energy that makes erosion happen is provided by the Sun. The Sun's energy causes the movement of water and ice in the water cycle and the movement of air to create wind.

Water moving downhill can carry away pieces of rock and soil

Temperature changes cause pieces of rock to flake away from the surface. Also, the acid in rainwater dissolves rocks containing calcium carbonate. These processes are called weathering.

The size of earth materials that can be moved by water depends on how fast the water is moving. A fast-flowing stream can carry large rocks while a slow moving stream might only be able to carry very small things like clay. Canyons are among the most obvious features made by erosion. Where a river meets the sea, it drops the solids, sometimes making a river delta. 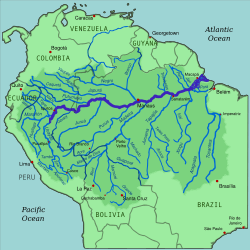 Drainage basin of the Amazon 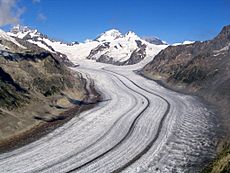 The Aletsch Glacier is the biggest glacier in the Alps 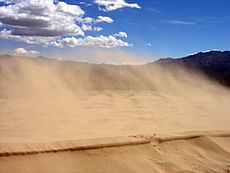 Wind is blowing sand off this dune in the Mojave desert, California

Large tropical rivers like the Paraná, Indus, Brahmaputra, Ganges, Zambezi, Mississippi and the Amazon carry huge amounts of sediment down to the sea. The Nile, perhaps the world's longest river, carries much less sediment than the others because, part of the way, it runs through less fertile regions than the other great rivers.

The Amazon has by far the largest waterflow, with an average discharge greater than the next seven largest rivers combined. It has the largest drainage basin in the world, about 7,050,000 square kilometres (2,720,000 sq mi). The Amazon accounts for about one-fifth of the world's total river flow.

The sediment discharged by the gigantic mouth of the Amazon stains the sea brown for hundreds of miles out to sea.

Ice erosion happens when a glacier moves downhill. As the ice of the glacier moves downhill, it pushes and pulls earth materials along with it. Glaciers can move very large rocks. Ice erosion can happen in another way. Cold weather causes water inside tiny cracks in rocks to freeze. As it freezes, the ice gets bigger, and pushes hard against the rock. This can break the rock.

One of the most famous examples of wind erosion occurred in the Dust Bowl, when wind erosion severely damaged farming communities.

Tectonic effects on erosion has long been recognized. For example, rivers form as a result of tectonic uplift (as Himalayas and Tibetan Plateau). All of the Earth's mountain ranges were created by the upward movement of the land by changes beneath the Earth's surface. When the ground rises the whole weather system can also be changed including local sea levels, wind strength and direction, rainfall and more.

The Earth's landscape is a product of two factors. Tectonics builds up height by surface and rock uplift, and climate controls the erosion. Erosion wears away upland areas over time. The interaction of these processes can form, modify, or destroy features of the Earth’s surface.

All content from Kiddle encyclopedia articles (including the article images and facts) can be freely used under Attribution-ShareAlike license, unless stated otherwise. Cite this article:
Erosion Facts for Kids. Kiddle Encyclopedia.