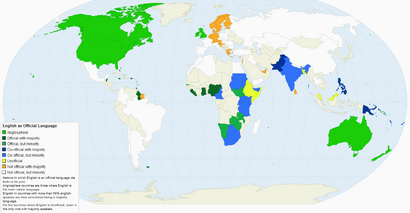 Approximately 330 to 360 million people speak English as their first language. With 258 million native speakers, the United States of America comprises the majority of the global total. Most native speakers of English are Americans.

Additionally, there are 60 million native English speakers in the United Kingdom, 19 million in Canada, 25.1 million in Australia, 4.7 million in the Republic of Ireland, and 4.9 million in New Zealand. Other countries also use English as their primary and official languages.

In the European Union, English is one of 24 official languages and is widely used by institutions and majority of population as native (United Kingdom and Ireland) and as a second language in other member states.

English is the third largest language by number of native speakers, after Mandarin and Spanish.

Besides the major varieties of English, such as British English, American English, Canadian English, Australian English, Irish English, New Zealand English and their sub-varieties, countries such as South Africa, India, the Philippines, Jamaica and Nigeria also have millions of native speakers of dialect continua ranging from English-based creole languages to Standard English.

India now claims to be the world's second-largest English-speaking country. The most reliable estimate is around 10% of its population or 125 million people, second only to the US and expected to quadruple in the next decade.

The Anglosphere - Countries where English is spoken natively by the majority of the population.

Other substantial communities of native speakers are found in South Africa (4.8 million) and Nigeria (4 million, 5%).

Countries where English is an official language

In some countries where English is not the most spoken language, it is an official language. These countries include Botswana, Cameroon (co-official with French), Eswatini (Swaziland), Fiji, Ghana, Hong Kong of the People's Republic of China, India, Kenya, Kiribati, Lesotho, Liberia, Malta, the Marshall Islands, Mauritius, the Federated States of Micronesia, Namibia, Nigeria, Pakistan, Palau, Papua New Guinea, the Philippines, Rwanda, Saint Lucia, Samoa, Seychelles, Sierra Leone, Singapore, the Solomon Islands, Sri Lanka, Sudan, South Africa, South Sudan, Tanzania, Uganda, Zambia and Zimbabwe. There also are countries where in a part of the territory English became a co-official language, in Colombia's San Andrés y Providencia and Nicaragua's Mosquito Coast. This was a result of the influence of British colonization and American colonization in these areas.

India has the largest number of second-language speakers of English (see Indian English); Crystal (2004) claims that combining native and non-native speakers, India has more people who speak or understand English than any other country in the world. However, most scholars and research that has been conducted dispute his assertions. Pakistan also has the English language (Pakistani English) as a second official language after the Urdu language as the result of British rule (raj). Sri Lanka And The Philippines use the English language, too, as the second and third official language after Sinhala, Tamil, and Filipino.

English is one of the eleven official languages that are given equal status in South Africa (South African English). It is also the official language in current dependent territories of Australia (Norfolk Island, Christmas Island and Cocos Island) and of the United States of America (American Samoa, Guam, Northern Mariana Islands, Puerto Rico (in Puerto Rico, English is co-official with Spanish) and the US Virgin Islands), and Hong Kong Special Administrative Region of the People's Republic of China.

Although the United States federal government has no official languages, English has been given official status by 32 of the 50 US state governments. Furthermore, per United States nationality law, the process of becoming a naturalized citizen of the US entails a basic English proficiency test, which may be the most prominent example of the claim of the nation not having an official language being belied by policy realities.

Although falling short of official status, English is also an important language in several former colonies and protectorates of the United Kingdom, such as Bahrain, Bangladesh, Brunei, Cyprus and the United Arab Emirates.

English as a global language 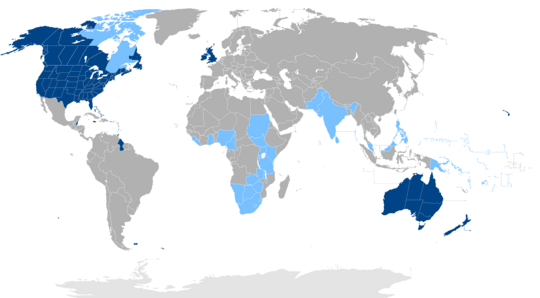 English is studied most often in the European Union, and the perception of the usefulness of foreign languages among Europeans is 67 percent in favour of English ahead of 17 percent for German and 16 percent for French (as of 2012[update]). Among some of the non-English-speaking EU countries, the following percentages of the adult population claimed to be able to converse in English in 2012: 90 percent in the Netherlands, 89 percent in Malta, 86 percent in Sweden and Denmark, 73 percent in Cyprus, Croatia, and Austria, 70 percent in Finland, and over 50 percent in Greece, Belgium, Luxembourg, Slovenia, and Germany. In 2012, excluding native speakers, 38 percent of Europeans consider that they can speak English.

Books, magazines, and newspapers written in English are available in many countries around the world, and English is the most commonly used language in the sciences with Science Citation Index reporting as early as 1997 that 95% of its articles were written in English, even though only half of them came from authors in English-speaking countries.

In publishing, English literature predominates considerably with 28 percent of all books published in the world [leclerc 2011] and 30 percent of web content in 2011 (down from 50 percent in 2000).

This increasing use of the English language globally has had a large impact on many other languages, leading to language shift and even language death, and to claims of linguistic imperialism. English itself has become more open to language shift as multiple regional varieties feed back into the language as a whole.

All content from Kiddle encyclopedia articles (including the article images and facts) can be freely used under Attribution-ShareAlike license, unless stated otherwise. Cite this article:
English-speaking world Facts for Kids. Kiddle Encyclopedia.