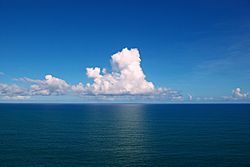 The east coast of South America is shaped somewhat like the west coast of Africa, and this gave a clue that continents moved over long periods of time (continental drift). The Atlantic Ocean is still growing now, because of sea-floor spreading from the mid-Atlantic Ridge, while the Pacific Ocean is said to be shrinking because the sea floor is folding under itself.

The Atlantic Ocean is bounded on the west by North and South America. It connects to the Arctic Ocean through the Denmark Strait, Greenland Sea, Norwegian Sea and Barents Sea. It connects with the Mediterranean Sea though Strait of Gibraltar.

In the southwest, the Drake Passage connects it to the Pacific Ocean. Panama Canal links the Atlantic and Pacific.

The salinity of the surface waters of the open ocean ranges from 33-37 parts per thousand and varies with latitude and season.