List of municipalities in Lycoming County, Pennsylvania facts for kids 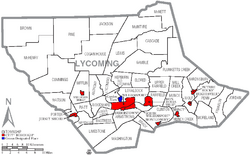 The 52 incorporated municipalities in Lycoming County are the subject of the first list, which gives their names and etymologies, dates settled and incorporated, what they were formed from, area, population, and location within the county. Two other lists dealing with former parts of Lycoming County are included. The second list is of former incorporated townships and gives the same information as above on their current status. The third list gives information on the eighteen other Pennsylvania counties which were formed from or contain land originally in the county.

In the 2000 census, the population of Lycoming County was 120,044, making it a "Fifth Class County" (defined by Pennsylvania law as "having a population of 95,000 and more, but less than 145,000 inhabitants"). It is included in the Williamsport, Pennsylvania Metropolitan Statistical Area and its county seat is Williamsport. Lycoming County is located in north central Pennsylvania, about 130 miles (209 km) northwest of Philadelphia and 165 miles (266 km) east-northeast of Pittsburgh, as the crow flies.

Location of Lycoming County within Pennsylvania

As of 2012, Lycoming County has 52 incorporated municipalities: 1 city, 9 boroughs, and 42 townships. Lycoming County's townships include 1 census-designated place (CDP) and 50 villages. CDPs are geographical areas designated by the U.S. Census Bureau for the purposes of compiling demographic data. Villages are marked with signs by the Pennsylvania Department of Transportation. Neither CDPs nor villages are actual jurisdictions under Pennsylvania law and their territory is legally part of the township(s) where they are located. The first list also notes the CDP and villages within their respective townships.

At 1,244 square miles (3,220 km2) as of 2012, Lycoming County is the largest county by land area in Pennsylvania (Erie County is larger, but nearly half of its area is in Lake Erie). Lycoming County is also larger than Rhode Island, the smallest U.S. state, which has an area of 1,214 square miles (3,140 km2). Its incorporated municipalities range in size from 0.6 square miles (1.6 km2) (three of the boroughs) to 76.5 square miles (198 km2) (McHenry Township). The city of Williamsport has the highest population of any municipality (30,706 or 25.6% of the county total as of 2000), while Brown Township in the northwest corner of the county has the lowest population (111 or 0.092%). Most of the county's population is in the valley along the West Branch Susquehanna River. 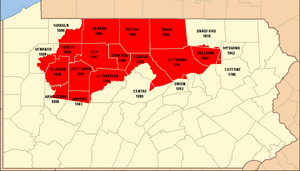 Map of the original extent of Lycoming County circa 1795, with current Pennsylvania county outlines for reference. Click on map to see dates.

The territory which today makes up Lycoming County was purchased from the Iroquois in two treaties signed at Fort Stanwix in New York: the first treaty was in 1768, and the second treaty was in 1784. The county was formed on April 13, 1795 from part of Northumberland County. The county originally contained seven townships when formed: Lower Bald Eagle, Loyalsock, Lycoming, Muncy, Nippenose, Pine Creek, and Washington. Today Pine Creek is part of Clinton County and Lower Bald Eagle is part of both Centre and Clinton counties, but the rest are still in Lycoming County, although many other municipalities have been formed from these since.

When originally formed in 1795, Lycoming County was "roughly estimated at about 12,000 square miles" (31,000 km2). Its territory stretched north to the New York state line, west to the Allegheny River, south nearly to the source of the West Branch Susquehanna River, and east to include modern Sullivan County and a bit beyond. However, by 1800, just five years after its formation, the first territory was taken from it to form new counties, a process that continued until 1847.

Twenty other Pennsylvania counties today contain land that was once part of Lycoming County: five were formed completely from it (Jefferson, McKean, Potter, Tioga, and Sullivan), eight were formed from it and other counties (Armstrong, Bradford, Centre, Clearfield, Clinton, Indiana, Venango, and Warren), three were formed from counties that were themselves formed partly from it (Cameron, Clarion, and Elk), Forest was formed from a county that was formed completely from it, two (Luzerne and Wyoming) contain territory that was part of lycoming County in 1795, and finally Union received a township from it in 1861.

The second table lists each of the twenty two known former incorporated areas in the county, and information on the modern township successors of these today. Note that former townships are only known for nine of the twenty counties containing land from Lycoming.

The map shown below is clickable; click on any municipality label to be redirected to the article for that city, borough or township.

All content from Kiddle encyclopedia articles (including the article images and facts) can be freely used under Attribution-ShareAlike license, unless stated otherwise. Cite this article:
List of municipalities in Lycoming County, Pennsylvania Facts for Kids. Kiddle Encyclopedia.