List of sister cities in Pennsylvania facts for kids

This is a list of sister states, regions, and cities in the U.S. state of Pennsylvania. Sister cities, known in Europe as town twins, are municipalities (sometimes counties, regions, states and other sub-national entities) that cooperate to foster cultural links. They interact with each other across a broad range of activities, often including education, business, the arts, or health care.

Many Pennsylvania jurisdictions work with foreign cities through Sister Cities International, an organization whose goal is to "Promote peace through mutual respect, understanding, and cooperation."

Cheltenham is twins with its namesake in England. 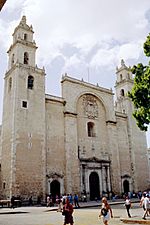 The Cathedral on the Plaza Mayor in Erie's sister city of Mérida is the oldest in North America.

The Acropolis of Athens in one of Philadelphia's sisters.

Sheffield, like a number of Pittsburgh's sisters, is twinned due to its impact on the world's steel industry.

A sign welcoming travelers to York proudly boasts both of that city's twins: Arles, France and Leinfelden-Echterdingen, Germany. The York-Arles partnership, established in 1954, was the first of its kind between American and French municipalities.

All content from Kiddle encyclopedia articles (including the article images and facts) can be freely used under Attribution-ShareAlike license, unless stated otherwise. Cite this article:
List of sister cities in Pennsylvania Facts for Kids. Kiddle Encyclopedia.