The Duck-billed platypus (Ornithorhynchus anatinus) is a small mammal of the order Monotremata. It lives in eastern Australia.

It lives in rivers and on river banks. It is one of only two families of mammals which lay eggs. The other is the Echidna, which has four species. The platypus was first described in detail in the early 19th century, but it took a while before biologists in England believed what they were reading.

These mammals are called monotremes because they have a common rear opening known as the cloaca. Through this opening faeces and urine are voided (put out), and physical activity takes place. This is a primitive ('basal') feature of tetrapods, which monotremes, birds and reptiles have today. The more 'advanced' ('derived') mammals have the system where the rear has two openings.

The plural of platypus is just 'platypus'.

What sort of animal is it? 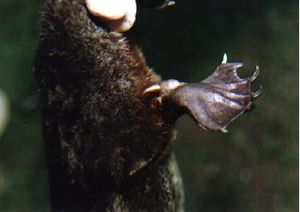 The calcaneus spur found on the male's hind limb is used to deliver venom.

The platypus looks similar to a beaver with a brown, furry body and wide, flat tail. Unlike a beaver, it has no feet (no toes), which are good for swimming. Its nose is large and rubbery. The platypus is sometimes called "duck billed platypus" because of this nose. It is similar to a duck's bill (mouth). Platypus can be big or small. The larger platypus live in Tasmania while the smaller ones live in Queensland. Adults can be less than 1 kg (2 lb) or up to 3 kg (7 lb). Its body can be from 30 cm (12 in) to 40 cm (16 in) long. Its tail can be from 10 cm (4 in) to 15 cm (6 in) long. Males are about one-third (1/3) larger than females.

The male platypus has a sharp spine on his two back legs called ankle spurs which contain a poison. It will not kill humans, but the poison has been known to kill small animals, such as dogs, and cause pain lasting as long as four months. The amount of poison increases during the breeding season. 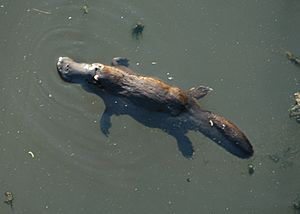 The platypus sleeps during the day, and moves mostly at night. It is a very good swimmer and spends much of its time in the water. The toes on its feet are joined. When it swims, it pushes itself along by moving the front two feet. The tail and back feet help it to turn left or right, but does not make it faster.

The platypus eats other animals. It eats worms, insect larvae, shrimps and yabbies, which are a kind of freshwater crayfish. It digs these animals out of the bottom of the river with its beak, or catches them while swimming. Its nose can sense many things that other noses cannot. The platypus can sense electricity from other animals. It keeps its eyes shut when swimming, using only its other senses, such as hearing, touch and changes in the electrical field. The platypus can also hunt without using its eyes. These are adaptations to life in rivers where the water is opaque with sediment. 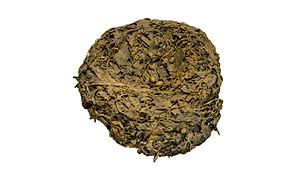 When on land, the platypus lives in burrows on the river banks. These holes are between 3 m (10 ft) and 8 m (26 ft) long. It makes these holes in the river bank a little above the water. It likes them hidden under roots. When a female platypus is pregnant, the female makes much larger holes, up to 20 m (66 ft) long. She blocks the tunnel with earth at several places. At the end of the tunnel, she builds a nest out of reeds for her eggs.

The platypus lays eggs in its nest. When the babies come out of the eggs after about ten days, they hold on to the mother. The mother makes milk for the new babies. The platypus does not have nipples, but milk comes through small openings in the skin. The young platypus drinks the milk from the mother's skin while she lies on her back. At six weeks the babies have fur and are able to leave the burrow for short trips. After four months they no longer need their mother's milk.

The long period as dependent young, the provision of milk, and the way the young learn through play, are all advanced features. The monotremes share them with all other mammals. The monotremes are a mixture of primitive and advanced traits, a situation known as mosaic evolution. 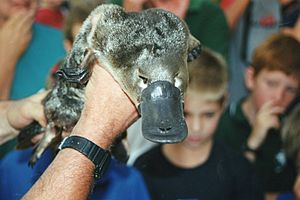 The platypus lives in small streams and rivers over a large area of eastern Australia. The map above shows this with dark purple. It has been seen in alpine lakes in Tasmania in the south, and north in Queensland as far as the Cape York Peninsula in tropical rain forest rivers.

In the past, platypus lived in South Australia but they no longer do so. There are platypus on Kangaroo Island, but these were brought there in an attempt to save animals people thought might become extinct. There are very few if any platypuses left in most the Murray-Darling Basin. The water there is no good because people used it to grow plants, and cleared the trees from the land. It is strange that the platypus does not live in some healthy rivers. It does live in some less healthy coastal rivers, for example the Maribyrnong River in Victoria.

Platypus are difficult to see in the wild. They dislike areas with people, spend most of their time underground or under water, and sleep during the day. At Eungella National Park in Queensland, there are spots on the river with viewing areas where wild platypus can usually be seen each evening.

The past and the future 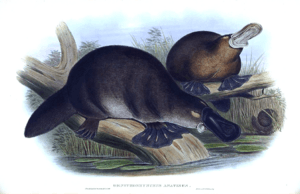 The first platypus specimen arrived in England in 1799. They sent the skin of a dead platypus, so biologists could study it. At first, the scientists thought the skin was a joke, because they thought no animal could look so strange. They thought an Asian had made it from pieces of different animals.

National Geographic magazine had a story on the platypus in 1939. Many people all over the world had never heard of the platypus. The story told how hard it was to raise platypus babies in zoos. Even today, humans have raised only few platypus. David Fleay at the Healesville Sanctuary in Victoria had the first successful zoo raised platypus in 1946. He nearly did it again in 1972 at the David Fleay Wildlife Park at Burleigh Heads, Queensland, but it died at 50 days. Healesville raised another in 1998 and again in 2000. Taronga Zoo in Sydney bred twins in 2003, and had another birth in 2006.

The platypus will probably not die out completely in the near future. Ecologists say that it is secure but faces future threat (safe now but not in the future) or common but vulnerable (there are a lot now but they are not safe). They say this because people can make the water unsafe for the platypus.

All content from Kiddle encyclopedia articles (including the article images and facts) can be freely used under Attribution-ShareAlike license, unless stated otherwise. Cite this article:
Platypus Facts for Kids. Kiddle Encyclopedia.